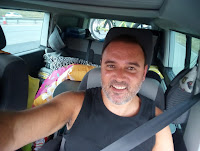 We made it to the Folkestone Eurotunnel terminal by the skin of our teeth for our scheduled departure time of 5.36pm. We never would have booked such an early crossing but we discovered a mix up with our original booking for 8.36pm - we’d booked it the wrong way around and they would have been expecting us to be departing our outbound journey from Calais. The error was identified a month before but, being the last day of school for the summer holidays, later slots had sold out and we were stuck with an unrealistic departure time or nothing.

Fortunately Tony’s school was closing at lunch time with a short staff gathering for leaving speeches, including Tony who is starting a new job at another school in September. I sat patiently in Cleopatra in the school car park from 1pm, hoping the speeches wouldn’t take too long and we could get our journey to Folkestone underway before the roads started getting busy. Tony appeared an hour later, weighed down with leaving gifts including a fully-inflated rubber ring in the shape of a doughnut.

Traffic was not our friend and at one point Google estimated our arrival in Folkestone twenty minutes after our scheduled departure. Conditions improved to the point that we arrived half an hour before departure but several minutes after when we should have checked in. Tony drove up to an automated check-in terminal and inserted his credit card for identification purposes. We prefer automated check-in kiosks to manned ones. Until today we've almost always arrived for our tunnel crossings hours earlier than we should and, in our experience, the machine lets us through and allocates an earlier train, while a human tells us off. On one occasion we were sent away again. This time though we were late and I didn't hold out much hope of departing on the 5.36pm train. We both looked at the screen in quiet anticipation as it computed its mysterious algorithm. After a second or two the screen filled with large green rectangles, each displaying a crossing departure time at twenty minute intervals beginning with our scheduled time. Tony reached out and tapped 5.36pm before the machine could change its mind. It spat out a letter hanger for the crossing we’d booked.

We continued towards the car parking area. There wasn't time left to park but you have to drive through the car park even if your hanger letter is being called. At the car park entrance a man wearing high vis was directing cars in one direction and taller vehicles in another. The vehicle two in front of us was another VW T5 campervan just slowing down to be given its instructions. Hi Vis just kind of shrugged his shoulders as if to say ‘You choose.’ It was the same response for Cleopatra and so we followed the other T5 into the high-vehicles waiting area where it was far quicker to immediately turn back around to head for passport control than for the cars who had to circumnavigate the whole of the one-way car park before they could exit again.

One Eurotunnel experience is different to the next. Sometimes we've been asked twice if we have gas on-board (we don't). Once we've been sent for inspection, so a staff member can check for themselves if the gas we don't have is turned off. Today nobody asked us. Perhaps they are beginning to remember us!

We were first in our lane for boarding. I needed a wee but didn't want to be that person missing from their vehicle when the light goes green for their line of cars, the barrier raises and nobody can move. I crossed my legs and waited until we boarded the train.

There were no further issues, I'm pleased to report, and the train left England about ten minutes late. I'm not sure if that meant we missed our scheduled departure after all, or if they were just running late.

I had my wee, Tony opened leaving gifts and cards and the 35-minute journey passed quickly. We arrived in Calais into daylight at 7.20pm with the aim to make it as far south as Dijon and stop on an aire for the night. On Saturday we will continue our drive south towards Nice where, On Sunday morning, we’ll board a ferry to Corsica for the first of four French islands we’ll be visiting over the six-week road trip.