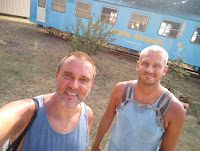 We woke to our last full day at Camping Amurucciu as the sun was just rising over the Mediterranean. For the last week we have slept upstairs in the campervan with both crescent-shaped pop-top-roof windows open so that the light breeze blew over us during the night, the light of day awakening us early, at about 6.30 each morning.

Tony was up first, as he was every morning so far, answering nature's call. When he returned from the toilet he put the kettle on to boil for coffee.

I joined him to sit under the awning a couple of minutes later and we ate breakfast of pate spread on the remainder of a baguette that accompanied the previous evening's meal.

An occasional fellow camper passed our pitch, right on the beach, for an early morning dip, but mostly the campsite was still asleep.

After breakfast I filled our collapsible bucket with clean water from the tap next to the site owner's house. He was watering the garden with a hose and I tried not to make a sound so he wouldn't notice me - already having been told off for using the electricity we'd paid for, for cooking food, I was unsure if filling buckets with water fell foul of his miserly regulations.

I added a miniscule amount of washing powder and fabric softener to the bucket and threw in all the clothes we'd worn so far, or at least since I'd last done laundry midweek. Adding so little detergent still left the clothes smelling fresh but had the advantage of not needing to rinse.

Tony hung the laundry on the washing line after I'd wrung all the water I could from each garment. We had no doubt the clothes would be dry by the time we returned from the beach later in the day.

We were on the beach by 8.30am, probably a record for us. It's been nice having such an unpopulated beach right on our doorstep. Aside from the campsite there isn't really much else in the vicinity and so it's only campers using the long stretch of sandy beach. Mostly they site themselves immediately in front of the campsite, leaving us about a five minute walk to find ourselves in complete solitude.

Many campers left chairs and parasols on the beach all day and all night, possibly just to save carrying them backwards and forwards, certainly not from any need to claim space.

The water on this stretch of the sandy Corsican east coast shelves gently and is shallow for quite a distance, no stones or pebbles to make swimming at all difficult.
All that separates the beach from Camping Amurucciu is a two-metre high sand dune. Around twenty camping units could pitch next to the dune, the rest of the campsite extending backwards into the shade of trees. There are no demarked pitches and so once checked in you are free to choose where to pitch - a nice touch but not without its pitfalls when someone situates themselves unreasonably close, as we found when the gazebo of a Russian family was placed so close we couldn't properly open the boot door.

The site was around half full during our stay at the end of July and there was never the need to queue for the facilities. There was an occasional wait for the two coin-operated hot-water showers, but I never queued for the cold showers. No hot water is provided at the dish washing sinks.

Camping Amurucciu has one huge plus and several minuses. On the one hand I've never had such a fabulously positioned camping pitch with the sea just 30 metres away. Letting it down is the general disrepair of the doors on the toilets and showers - you always feel that the handle might come off in your hand and at least one of the shower doors no longer has a lock on it. The electricity is not earthed, and the hook-up cabinets, fixed high up in trees have black bin liners taped over them, presumably a half-hearted attempt to waterproof them.

The owner comes across as nosey and penny pinching, darting about the site on his golf cart, reprimanding people for using the electricity to cook. Providing no hot water is similarly miserly.

For two of us in a campervan with electricity (that we couldn't use) was €23 per night. That's not pricey, but still at a level where you should reasonably expect hot showers and lockable doors, and to utilise the electricity how you please.

I don't think the drawbacks would put me off staying again, though I wouldn't pay the additional money for an electric hook-up next time. But I could only recommend the site for those who would be happy with such basic facilities and for whom the great location would outweigh the negatives.

When we pack up to leave tomorrow, bright and early, we're heading south to Porto Vecchio, where we hope to find available camping pitches at either of two sites that don't take advanced bookings. Fingers crossed.