Showing posts from April, 2018
Show All

Mark Farm is a Camping and Caravan Club Certified Site, a members-only site for five units. It's a generously-sized field for so few campers and has electric hook-ups plus two toilets and a shower, all for £14 per night (£18 in winter months). The site is located towards the eastern side of the Dengie peninsula in Essex, sandwiched between the River Crouch to the south and the Blackwater to the north, both of which are tidal. To the east is the North Sea. When I booked by phone a day ahead I was given the key code for the facilities block and asked that, if I didn't see anyone to pay, I should put the site fee in a post box on the noticeboard. We arrived at 6.30pm and after setting ourselves up for our stay, decided to walk to nearby Tillingham where there is a choice of two pubs. The quickest route is through fields and the initial walk is quite muddy in wet weather. We approached the village through the church graveyard and immediately spotted the Fox an
Post a Comment
Read more

We remembered our wellies - Stiffkey again

We're getting back into the routine of weekends away again. Society was our chosen destination this weekend because the best of the, already great, weather was promised in north Norfolk. On this visit we finally remembered to bring our wellies and so, before leaving for home, on Sunday morning we walked across the salt marshes/ mud flats out towards the sea. Despite being next to the sea, you can't actually see the water from High Sands Creek campsite because of the vast expanse of mud flats. And one wouldn't dare to try to walk across without a tall pair of boots. Not far into our exploration we came across a pair of boots swallowed almost all up in mud, the owner hopefully having made it out barefoot. That certainly encouraged us to tread more carefully. Having reached sand and finally the sea, looking back it was near impossible to tell in which direction we'd come. In the distance a sand bank had dark grey blobs I'm inclined to beli
Post a Comment
Read more 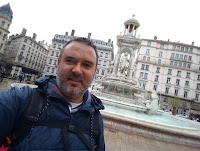 We'd planned on staying in Spain for the penultimate night of our holiday and then making our way north through France and spending the last night on an aire. A rainy week prompted us to change our plans for the last couple of days and we left Spain a day early for two nights in Lyon. We arrived at Camping International Lyon at 4pm on Friday. The site is owned by Huttopia, the French camping chain we swear by, but it is branded under their City Kamp umbrella. Unfortunately this site is a far cry from what we've come to expect from Huttopia - it's no wonder they've created this off-shoot brand so as not to tar their name. The site is right next to the A6 motorway in Dardilly, an unattractive suburb of Lyon comprising mainly of budget hotels. Pitches are in purpose-built rows with privacy hedges. The showers lack TLC. This campsite is not for spending a lenghty holiday, and most people seemed to be using it as a one-night stopover en-route to somewhere el
2 comments
Read more

We take our campervan into the mountains of northern Spain for a stay at Camping La Fresneda. We spend the week hiking to the El Salt waterfall, the abandoned convent of Virgin de Gracia and the ruins of the great Ermita de Santa Bárbara church. Plus we go off in search of a hot spring near the town of Prat de Compte. Don't forget to subscribe to our YouTube channel . Facebook | Twitter | Instagram  | YouTube
Post a Comment
Read more

Youtube video blog from our campervan road trip to northern Spain.  Part 1 - We stay on a perfect campsite in the Costa Brava on the cliffs overlooking four small beaches. We check out the coastal path, the camins de Ronda, for a hike, cook our own paella and mix a sangria in a makeshift jug. Part 2 - Our friends arrive in their campervan, Daisy, wen enjoy a meal in Tossa de Mar, and we all go on a geocaching hunt along the Cami de Ronda coastal path. Subscribe to our Youtube channel
Post a Comment
Read more

Camping La Fresneda and days out 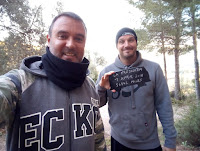 The rain in Spain falls mainly on the plane. It also falls in the mountains as, after our week at La Fresneda, we can attest. As we checked out last night, Joost, one half of the campsite-owning couple, told us we'd been particularly unlucky. April is rainy season but usually only for half a day per week. This week had also been unseasonably cold - colder than winter, he said. But Tony and I hadn't let the weather spoil our enjoyment of our second week in Spain. To be fair the rain had mostly waited until we had returned from a day out hiking and we still enjoyed evenings sitting outside under shelter, just wearing a few more layers than we'd hoped to in Spain at Easter. Camping La Fresneda is a little gem of a campsite with around 20 pitches nestled in a valley, three kilometres from the nearest town, of the same name. Whichever pitch you choose you'll have amazing views of the surrounding mountains. Watching the peaks turn from olive green to dusty p
1 comment
Read more

We woke up late and enjoyed sardines on toast for breakfast in the warmth of the awning. Already it looked like the weather forecast was wrong - the sun was out in a cloudless sky when cloud and rain had been foreseen. We showered and dressed not having discussed our plans for the day. It was beginning to warm up and I took my glass of water to the edge of the terrace on which Cleopatra was pitched. Here the views over the valley between Spanish mountain ranges were immense. 'Shall we just stay here and sit in the sun?' I asked Tony. 'If it clouds over later we could walk back in to La Fresneda because we haven't had a proper explore.' Tony agreed, chilled out and willing to just go with the flow. So we brought the two chairs out into the sunshine and I fetched our Kindles and we sat in quiet bliss, sun beating down on our faces, reading our books in the quiet solitude. When I looked up occasionally, engrossed in the green and lush landscape below I co
Post a Comment
Read more
More posts