We arrived at Camping Cala Llevado, just south of Tossa de Mar on the Costa Brava, at around 3.30pm after eight hours on the road.

We stopped in Lloret de Mar to buy provisions from the Aldi supermarket there and thanking goodness we weren't staying there. It's the kind of town I imagine when I think of Spanish resorts with modern high-rise tower blocks, and bars serving full-English breakfasts.

A suitable distance, and unforgiving landscape, separates Cala Llevado from Lloret. The campsite sits almost alone, high up on the cliffs above a little bay with several beaches. Our pitch had a sea view, just about. The staff allocate the best pitches available at the time you check in. Some pitches have awesome views, the tent pitches especially.

The site is huge but spread out across a huge area and so doesn't feel too busy or claustrophobic. Our first few nights were over Easter bank holiday when there were quite a few pitches occupied.

The showers and toilets are immaculate and rank among the best I've experienced. The swimming pool looked inviting and there were plenty of sun loungers set around it. I did try to swim one afternoon after coming back from the beach, jumping in so as not to chicken out, but I have to say I swam as fast as I could for the side to get myself out of the freezing water as soon as possible! Maybe it's warmer in the summer.

We spent our first full day on the beach, walking down to the largest and sandiest beach and deciding to see if we could get to the furthest little beach. A set of steps in the rock led up to a road which ended in a tunnel that said it was forbidden to enter. We walked through it regardless, the bright blue sea at the other side beckoning us to ignore the warning.

On the other side of the tunnel a set of steps led down to a little beach and, tide and waves allowing, you can walk around to another beach and then another.

Feeling pleased with ourselves at bagging a beach all to ourselves and that the weather was just what we'd hoped for to enjoy beach days, we unrolled our towels and lay with only the sound of the waves for company.

We remained the only ones there for about an hour before the first walkers of the day appeared. It transpired that dozens of people would ignore the 'Prohibited' sign and arrive on our beach before ascending the steep bank at the end, some coming back again shortly after and others seemingly continuing on their hike.

It wasn't warm enough to swim, being the first week of April, but the sun was warm enough to feel, in all other respects, that it was a summer holiday. 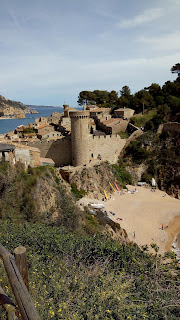 We walked the three kilometres to Tossa de Mar the following day. From the campsite a path takes you through pine trees on a fairly direct route in to Tossa. It's hard going since the path ascends and descends many times and the shale underfoot can be slippery. A tower drew us up its little mount and we got our first glimpse of the old town.

A 12th-century castle is beautifully preserved with fortification walls, towers, cobbled streets and a courtyard. At the peak of the hill is a lighthouse and bar with fabulous views out to sea.

The newer part of Tossa butts up to the old and, while there are modern hotels, they're low rise and few and far between. The shopping streets and bars and restaurants are tasteful and a beautiful sandy beach joins old and new together nicely.

After a good look around we bought a few groceries at the Dia supermarket in town and set about walking back to the campsite via the coastal path, signed by blue paint on the rocks and trees. It was tough going but worth it for the views of the rugged coastline and water below.

It took about two hours coming back via the scenic route and the sight of the first of the campsite's beaches was a welcome relief. I couldn't recommend anyone takes the path we did - when we told the English lady at the campsite reception she said, in the thirty five years she's been there she's never considered walking that way!

We spent an hour on the beach before climbing the final ascent to our camping pitch.

We had a day's hiking to Cala Pola where the cliff edge path was a little easier than between Tossa and Cala Llevado. The sun continued to shine down on the crystal-clear sea and the views along the mustard-coloured rocky cliffs are spectacular. The beach of Cala Pola is small and perfectly formed and there were just two others on it. It would be a different story when the campsite behind opens for the summer season though.

We walked back through the mountains and back into Tossa past the sports complex next to which was a little pond with sunbathing turtles. 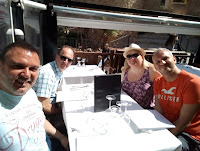 By now our friends Jules and Pete had decided to join us for three nights on their way to Tarrogona in Daisy, their VW camper. We had a final beach day on the Wednesday before meeting them for three evenings and two days of fun and silliness.

They were able to get a pitch just across from ours. We had the view but they had the evening sun. We cracked open the beers sitting outside Daisy before moving across to the shelter of our awning when the sun went down, our little halogen heater on the floor keeping our legs warm while we laughed, chatted, drank sangria and played card games.

During our two days together we willingly repeated our visit to old Tossa, where Jules and Pete treated us to a delicious three-course lunch, and our walk to Cala Pola.

On our final night together Tony and I cooked a paella for the four of us, while a tiny black kitten mewed underneath Cleopatra. We gave her a tin of sardines which she had finished by the time we got up in the morning.

We said our goodbyes before Daisy and Cleopatra went on their own adventures for another week, though they meet again briefly in the car park of a Lidl supermarket!

In an hour and a half we'll be arriving on our next campsite for a week in the mountains.