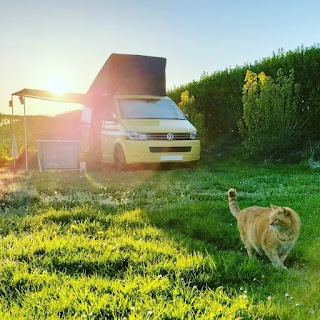 We used to take Eurotunnel crossings for granted, hopping across the channel ten times a year. It's now Easter and it's the first time we'll have been to France since last summer. Just like last July, I didn't really believe we were going until we were through border control. They only asked for our passports this time - we'd uploaded our NHS Covid passes to our Advance Passenger Information on our tunnel booking - so it seemed just like simpler times before a worldwide pandemic brought everything to a standstill.

We are having to fit our France trip around a family holiday to Wales which left us five nights at the end of the Easter holiday fortnight. Therefore we decided not to venture too far.  Just 2 hours 45 minutes from Calais is our campsite home for the next five nights. Called 'The Cliffs' because it's perched on top of them, it's a new acquisition for the Huttopia chain we often camp with. This will be our 18th Huttopia site and our 24th Huttopia stay (21st and 27th if you include their CityKamp brand). It's nice they keep opening new sites so we don't run out!

We've stayed nearby a couple of times as an overnight stopover on our way to the west coast and did once plan a holiday to Brittany, but we've never actually properly visited the north coast of France. The Brittany holiday was shelved last minute when I checked the weather forecast when we emerged from under the channel. That was back when we still booked campsites ahead and we lost our money but had a far better holiday in Vallouise in the alps than we would have had in a wet St Malo.

Weather aside, I guess we thought we'd feel as though we hadn't gone properly abroad if we could still see the British mainland on a good day and so we haven't ever made plans to stay on the north coast again. It's only trying to cram the five days left of the holiday after our family week in Wales that kept us closer to Calais than we'd usually entertain. And that's still only because the weather is as good here as if we'd gone further south.
We woke up to amazing blue skies on our first morning which was Good Friday. The shower was hot and powerful in a pristine facilities block. Tony fetched the freshly baked rustic baguette we'd ordered the night before from reception and we sat down to breakfast in the sunshine. Pork paté spread generously on my half of the baguette, while Tony had sliced avocado and mayonnaise.

Our first full day out, on our bikes, was thoroughly enjoyable. The geology is similar to that directly across the channel but it's not at all the same otherwise. For a start this is a bank holiday weekend and British campsites will be heaving with families. The French don't really camp until summer and many sites are still closed. We spent the day cycling around quiet country lanes between pretty villages with hardly a soul around. Fécamp was our ultimate destination for the day and we arrived to take in a full view from the clifftop. A small harbour was home to bobbing boats and the town spread out between the sea and the rising valley behind.
We locked up our bikes near to the pebble beach and walked along the sea front. Afterwards we mooched through the streets, often emerging in pretty green squares, before heading back towards our bikes. We bought snacks from a small Carrefour supermarket and ate them on a bench next to the harbourside.
We arrived back on the campsite to find it emptier than we left it that morning, even then only around a third full. Nobody was in the swimming pool for our post-day-out swim.
We alternated between days out on bikes and on foot. Our hikes took us in both directions along the coastal path. The towering white cliffs occasionally give way to quaint little towns with modest pebble beaches. There is little modesty in the stunning architecture - the buildings are grandiose and varied in style, some like mini castles. We made our routes circular by coming inland a little and hiked through woodlands and open fields.
By the end of day five we were both exhausted but invigorated. I think, if the weather is right, we'll try to see more of the north of France.