Probably the best aire in France 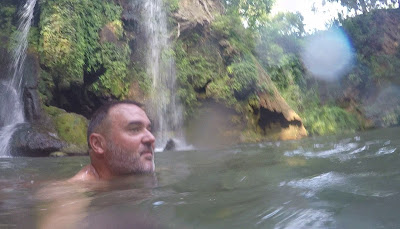 Driving days are rarely exciting - we're not ones for stopping to sight see when we've an ultimate destination to get to. So the discovery of La Chute du Grand Baou for our pre-ferry crossing stopover was the best surprise.

While Tony was driving south through France I was researching aires that would leave us with a short drive the next morning and I had a shortlist of three. La Chute du Grad Baou was top choice because of a promised waterfall. I thought I could make out people swimming in one of the website's photos and I'm never one to turn down an opportunity for wild swimming.

We arrived in Brignoles at around 5pm and popped into Lidl to do a small shop for food and wine for that evening. Then we filled up with diesel before heading 15 minutes north to the aire.

A short dirt track leads down to a small restaurant with tables outside. To the side are three huge terraced fields for motorhomes. There was one other motorhome there already, hugging the shade from the trees along one side. Two others arrived later.

We paid 10 euros to a man at a desk. He was also taking 2.50 from people just to visit the waterfall. For us there was no additional cost and we could come and go at will.

After pitching up we donned our swimming trunks and headed for the waterfall. It's hidden from sight but is so incredibly close to the aire you can hear it from your pitch. Steps lead down to the river that has several pools for swimming. We made slow progress because Tony is still unsteady following his ankle operation in December. There were three or four families sitting beside and swimming in the river and pools.

There are two large waterfalls that plunge into the largest and deepest pool and that's the pool we headed for. The water was cool and it felt great in the 37 degree heat. I couldn't stop myself from grinning. The whole place doesn't look real - it's magical.

Satisfied with our swims we spent the remainder of the evening relaxing beside Cleopatra with beer and, a little later, wine.

We were awake at 8am to begin getting ready to leave for the ferry port at Nice but found the time to revisit the natural pool for a swim before anyone else was there.

An aire is usually just a place to break up a journey but here it is a destination all of its own.