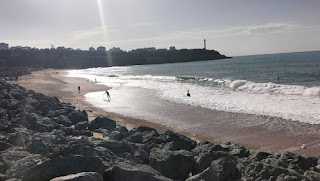 October holidays are often about embracing autumn, wrapping up warm and enjoying walks in countryside coloured flame red, orange and yellow. That was almost the holiday we thought we were going to be having this week after French fuel strikes and the inevitable shortages steered us towards a plan to visit northern Germany. The weather forecast had us rethink and decide to try our luck at getting fuel enough to make it to the south west of France. This new plan was only hatched after we'd left home, about half of the way to Eurotunnel.

We do love the sandy coast of France's Atlantic coast and have stayed everywhere from the Vendée down to Landes. So when the best of the weather was to be around Biarritz, a part of the coast we'd not yet explored, it seemed the ideal choice.

We arrived in France at about 11pm and decided to use the Camping-Car Park at Incheville, a two-hour drive away in Normandy. We've stayed twice before and I checked the Camping-Car Park app a couple of times to check there were spaces. It reported only one other motorhome was present. We had a slight panic upon finding the screen on the payment bollard to be out of order. Fortunately we already have the 5-euro entry card and I decided to check if it could be topped up through the mobile app. It could and so I added funds and then waved it at the barrier which magically opened for us. We had a good night's sleep and were ready to set off bright and early for the drive south.

During the journey I researched campsites and found one through the ACSI app that looked fantastic - right on the beach just outside Saint-Jean-De-Luz. We arrived there at 1.30pm. The sign in the reception office window said they were closed until 3pm. With 90 minutes to fill we walked around the site to find the pitch we would like. It's was a small site and that didn't take long so we decided to walk along the coast.

Almost immediately the path took us past another campsite, Campsite L’International Erromardie, where the frontmost pitches had fabulous views of the beach and sea. Two of them were unoccupied so we decided to have a scout around that site. We liked the facilities and found its reception office open. A friendly lad was on reception and we asked if there were beachfront pitches available. He said there were and gave us the pitch numbers of two we could choose between. We asked if we could go and look at them and then decided we'd take one. Firstly we wouldn't have to wait around for another hour and secondly this beachfront pitch had a proper view of the sea whereas the first sight you'd need to be standing to see it over a bush. Tony went to fetch Cleopatra while I went to book us in.

The price board showed we'd be paying 29 euros a night but the receptionist saw my ACSI card while I was looking for my driving licence and told me they accepted that both as ID and as a discount card. We ended up paying just 18 euros a night for a sea view pitch with electricity and its own tap.

And so by 2.30pm we were ready to explore the area. Saint-Jean-De-Luz was just a 30 minute walk and so we decided to spend our afternoon wandering its pretty streets. The following day we cycled for 90 minutes to Biarritz which is a stunning seaside town with grand architecture and sprawling Sunday market. Another day we caught a bus to Bayonne only to be disappointed with the city. We rescued the day by catching a bus to the northern side of Biarritz where we hadn't yet ventured. On our final day we cycled to Hendaye, the last town before the Spanish border, in order to see Pheasant Island.

Pheasant Island was brought to our attention by Atlas Obscura, an online guidebook to the world's most wondrous places. I often check to see if there are any listings nearby and this one could be achieved with an hour's cycle. The island is in the middle of the river that divides France and Spain and is unique in being French for six months and Spanish for six months of the year. You can't visit it and there's nothing but trees on it anyway, but it is interesting and I do like ticking things off from Atlas Obscura. We thought it would be silly not to cross the border and so we cycled over the bridge into Spain. We didn't go far, just to view Pheasant Island from the other side (and the backdrop is prettier from the Spanish side). A small shopping complex sits beside the bridge with stores piled high with spirits, priced in boxes of six. We can only assume the French come across and stock up at prices even cheaper than they are in their own country. And as it turns out, Hendaye has a lovely beach where we spent a couple of hours in the sun.

This last stretch of the French Atlantic coast didn't disappoint. The beaches are lovely, though we imagine get incredibly busy in peak summertime. Our October excursion seemed to be a great balance. We had 25 to 27 degree temperatures and plenty of sunshine. We even had a couple of proper swims in the sea.

I know I've written before that the west coast of France beats the south in our book. Nice is huge, pretentious and impersonal, as is Cannes. Biarritz is regal, glamourous but has a bohemian vibe. It's rather like a French Brighton. We loved it.