Mark Farm is a Camping and Caravan Club Certified Site, a members-only site for five units. It's a generously-sized field for so few campers and has electric hook-ups plus two toilets and a shower, all for £14 per night (£18 in winter months).

The site is located towards the eastern side of the Dengie peninsula in Essex, sandwiched between the River Crouch to the south and the Blackwater to the north, both of which are tidal. To the east is the North Sea.

When I booked by phone a day ahead I was given the key code for the facilities block and asked that, if I didn't see anyone to pay, I should put the site fee in a post box on the noticeboard.

We arrived at 6.30pm and after setting ourselves up for our stay, decided to walk to nearby Tillingham where there is a choice of two pubs. The quickest route is through fields and the initial walk is quite muddy in wet weather.

We approached the village through the church graveyard and immediately spotted the Fox and Hounds. We decided to walk a little further to the Cap and Feathers which, by Trip Advisor reviews, seemed to have a slight edge.

We first tried to enter via a door with no handle. Two other doors, at the front and rear of the pub allow access. We were delighted to find four real ales on tap - at least they looked like they were on tap. We ordered two pints of Captain Bob and the bar lady trotted off into a back room with two pint glasses. When we later ordered Oscar Wilde she did similar and we'd could see through a gap in the door that the ales were in barrels on a rack as you'd find at a beer festival - nothing was actually 'on tap.'

The Oscar Wilde, from local Mighty Oak brewery was fabulous, dark in colour, almost porterish in taste, and a little rough around the edges. We'd learn later it has been a CAMRA beer of the year.

We walked back to the campsite after enjoying two pints each, which I forgot to mention were just £3 a pop. Chicken fajitas were for dinner and, since I'd prepped an onion to fry and cut up some salad at home, it was an easy and tasty assembly job - just what you need after the pub!

After a good night's sleep and bacon sandwiches for breakfast we set out on a 12-mile walk that would take in Bradwell Harbour before following the raised sea wall around the peninsula to St Peter's church and then back inland.

Although it was overcast, the walk was enjoyable. I was keen to see St Peter's church, a red-roofed, barn-like structure which has stood on the remote site since 654 A.D. 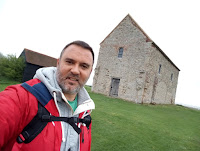 There was singing to be heard from behind its closed door and I tried to capture the audio on my GoPro - check back for the video in a couple of days.

Our walk took us back near to Tillingham and so we decided not to even attempt to resist a couple more pints of Oscar Wilde at the Cap and Feathers.

We enjoyed a mid-afternoon snooze inside Cleopatra with the heating on before the arrival of a vintage campervan and its owners unfolding outdoor chairs shamed us into sitting outside for a while like proper campers. 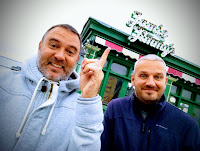 On Sunday we ventured to Southend-on-Sea. It's somewhere I've been interested in visiting since seeing it on Jamie and Jimmy's Friday Night Feast on TV.

We parked on the sea front just opposite the pier and quickly learned this pier costs money to experience. It's the longest pleasure pier in the world, extending 1.33 miles into the Thames estuary. Tickets fall into three price categories, with walking each way the cheapest at £2 per person, with other options being the train one way or return.

We were slightly disappointed to learn that Jamie and Jimmy's cafe isn't an actual open-to-the-public venue. It's smaller than it looks on TV and was closed and unoccupied.

We had a cold and windy walk back, using the remaining hour of our parking ticket to visit a few of the shops in the town centre. 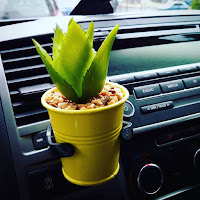 Star buy of the shopping trip was an artificial cactus I thought would fit in an air vent holder that had come with a tub of chewing gum. The cactus sat in a bright yellow bucket, just the right colour for Cleopatra. It looks lovely!