After a sunny week on the Spanish coast, a three-hour drive brought us to Camping La Fresneda in the mountains west of Barcelona.

We arrived on site at 2.30pm and parked next to a set of stone stairs and a sign pointing to a bar and reception. We found it closed until 5pm but Jet, one of the owners spotted us from a window of their home next door and came out to greet us.

She addressed us in Spanish apparently having looked at us and guessed we were locals. I explained we had obtained our tans from the seven days prior in the Costa Brava.

Jet unlocked the bar and reception and offered us a welcome drink. We chose beer which was San Miguel on tap. We were given a very comprehensive ring binder full of information about the campsite, the local area and ideas for walks, bike rides and days out.

After checking in we were able to choose any pitch we liked. About five others of the 20 or so pitches were occupied. We chose pitch seven next to a stone wall and on a terrace overlooking the valley and mountains.

We fussed around for what seems like ages unpacking all the stuff we'd only packed up hours earlier. Travelling light is something we haven't learned to do, preferring instead some little luxuries like a folding kitchen unit inside a drive-away awning, illuminated at night by solar fairy lights.

Tony does the complicated stuff like pitch the awning, while I keep out of the way and tweak the positioning of the lights.

Content we had all our little luxuries ready for use we had a little under four hours to spare before dinner - we'd agreed to an invitation to paella night when I reconfirmed our booking a week ahead.

Our welcome pack showed a two-hour circular walk to the town of La Fresneda and so we decided to have a little hike and short exploration.

The surrounding landscape is mountainous with red stone appearing occasionally through the vegetation, predominately olive groves. It's a rugged terrain, of the kind you might expect to find Wylie Coyote appear atop a cliff-top boulder, poised ready to drop an anvil on your head.

La Fresneda looks quaint from a distance, perched on top of its little hill. It looks like little terracotta-painted houses. Only once you enter the town can you see the grandness of the architecture. It has all the appeal of a little run-down hilltop village but in actual fact its buildings are huge three- or four-storey affairs.

We walked around briefly, anticipating a much longer exploration when we weren't so pressed for time, but we walked to the peak of the hill where a castle wall sits proudly, a modern set of metal stairs taking anyone brave enough to the highest spot for several miles.

We returned to the campsite by the same route, leaving the slightly longer path for another day.

The campsite showers are beautiful with adjustable temperature and as hot and powerful as you like.

I put on a shirt I'd packed for just such an occasion as paella night, though it was creased to hell. Tony complained that he didn't have anything so smart in his luggage, as I guessed he might.

We enjoyed a drink in our awning before starting to hear others making their way to the bar.

To be honest I don't think either of us were particularly looking forward to dinner - I just didn't want to appear rude by declining the invitation. We'd filled up with provisions at Lidl on our journey and I'd have been far happier being able to conjure up a tasty dinner from our ingredients. Plus our experiences to date of things like an Italian porchetta night had us expecting to be seated at a long table and have to make conversation with complete strangers for two hours. 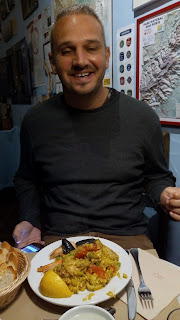 We were relieved to see tables for two dotted around the small bar area and took one at the back. We chose a nine euro bottle of red wine, not wishing to look cheap by ordering the seven euro one.

It was announced that the paella was ready and invited to take our plates onto the terrace where the huge paella pan was being attended to by Joost.

Our plates were piled with fragrant, yellow rice and seafood and chicken. It was delicious and I even ate the mussels and shellfish, though Tony had to de-shell my prawns. We were asked if we wanted a second helping which was just as big as the first.

Dessert was a lemon creme mousse with limoncello-soaked sponge cake hidden beneath. Finally coffee was offered and Tony ordered espresso while I, sensitive to caffeine just before bed, opted for decaf. I saw mine being made from the same machine a everyone else's though, so Tony drank mine too.

Soon after, the first couple paid and left and everyone else, in turn, did the same. Dinner had been lovely and not the socially-awkward experience I'd expected. Even so, I'd have been just as happy to have cooked something ourselves.