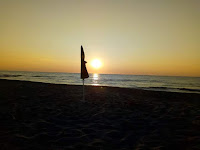 It's 7am and I'm alone in a calm ocean. The sun is low over the horizon and still gently pink. I can't see another person or even a residence where people might still be sleeping. There's just me, crystal clear water, a white sandy beach, trees and mountains. It's a truly special way to start the day.

OK, so I know it's the Mediterranean Sea and not the 'ocean,' but 'sea' just didn't feel grand enough of a word to describe the peace and solitude I felt at that moment.

It's morning two of our stay on this beautiful campsite on the eastern coast of Corsica, France's largest island. We have the perfect pitch with just a two-metre-high dune between us and the sandy beach.

It's a large campsite and, though there were about 40 to 50 other camping units here when we arrived, I think ours is the best pitch.

Campers seem divided on where to locate themselves. Half of them have taken pitches away from the beach in the shade of trees while others are dotted along the dune. There's still room for dozens of other visitors and I assume the site will start to fill up as August fast approaches.

The campsite facilities can be best described as rustic. We discovered only in the evening of the first day that all but one of the six toilets are just holes in the ground. There are six showers of which three have hot water courtesy of a coin-fed meter, only two of which were working. The other showers were simply cold.

It appeared to begin with that there was a queue for the showers at just the time we'd decided to wash the salt water off for the day. But in actual fact it was just several people trying to make sense of the hot water situation. I just walked straight into one of the cold shower cubicles and shut the door. Shut, not locked, because the lock didn't work. I made sure my shoes showed under the door and my towel over the top so that nobody tried to come and join me, not that they would because everyone seemed to want hot water.

Sure a warmish shower would have been my first choice but the cold water proved to be the only opportunity to cool down from a day that had seen temperatures reach 35°C. Plus I don't like queuing for a campsite shower and I don't like paying for a couple of minutes of hot water.

There are probably some for whom the facilities were too basic, but for us this would do nicely. If a site with this amazing location had five-star facilities we'd be paying €45 per night and not €23.

We've quickly settled in to camping time - going to bed when it gets dark at 10pm and getting up at dawn when the sun is rising over the sea. Sliding open Cleopatra's side door and walking a few feet straight into the sea feels like luxury (and takes away the need to have a cold shower in the morning!).

For our first full day yesterday I'd have been content with lounging around in our hammocks on our generous camping pitch but Tony, always mindful of having white bits, wanted to find a piece of beach to ourselves.

We spent most of the day alone on a huge stretch of sand, properly unwinding from the stresses of daily life. Holiday mode was easy to switch to and I lost myself in the book I hadn't read since we were last on a beach in May.

We were only five minutes walk from Cleopatra and so when we decided to locate a supermarket at 4pm it didn't necessarily mean the end of our beach day. We packed up our towels, left them in the van and sought out a large Leclerc which, conveniently, turned out to be a shorter distance down the road that we'd walked to leave the campsite.

We spent six euros on dinner and beers. Tony wanted a Greek salad and we had feta and a cucumber in our coolbox that needed using so we bought three huge tomatoes and some little gem lettuce, adding olive oil and balsamic vinegar from our camping larder. A crusty baguette made our salad into a meal.

We enjoyed a couple of beers each before a few glasses of red wine as the sun went down. It wasn't truly dark when we retired to Cleopatra's pop-top bed. A lovely breeze wafted over us through the fly screen windows on each side and sleep came easily.

The light of the day woke me up and the draw of the water beckoned me in for this 7am swim, with not a single other soul yet awake. Bliss.