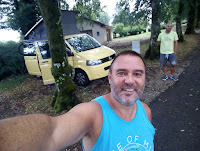 We arrived at the aire de camping car in Corgirnon at midnight. It was a five-hour drive south of Calais. For the final 30 minutes of the journey there'd been lightening in the sky, which to start with I'd thought was the van setting off speed cameras. We put Cleopatra's rain-cover topper over the roof to keep the fabric dry, but it stopped the breeze coming through the windows. The heat and the sound of thunder and rain didn't help me get off to sleep immediately, though eventually I must have drifted off.

We woke to the alarm, set for 8.30am, which Tony turned off and went back to sleep. It was another hour later that I got up and went to have a wash and brush my teeth at the rather-rustic toilet building. There's a double sink that needs a good clean, a hole-in-the-ground toilet, also needing a good clean, and a urinal below an opening in the wall looking, rather inappropriately, over a children's playground. These aren't facilities you'd accept on a campsite, but for a one-night stopover they fit the bill perfectly.

As I was walking back to Cleopatra I saw a man on a bike carrying a money tin.

We've stayed on this aire several times and someone collected money from us the first time but never since. I guess we've left too early for payment collection until today and, to be fair, I've felt bad about not paying but, with no office or even a post box on the site to leave money, there's nothing you can do when you need to get back on the road.

The man on the bike was hovering around a motorhome unsure if its occupants were awake. When he heard Cleopatra's side door open he peddled over towards me. My French is limited to non-existent - I didn't get my first choice of language at school and was taught German in my first year, finding it really hard to start learning French a whole year later. I just didn't take to it. I understood from the man's pointing and the French words for 'red' and 'shower' that he was saying the code he'd written on the receipt opened a door to a shower room! That was a nice surprise given that tonight we're on another aire and I'd been worried about going two nights without the chance to properly wash. As with the other facilities in the block the shower room wasn't spotlessly clean but hot water flowed well from the shower and I left feeling unexpectedly clean and was pleased to dress in clean clothes.

So here we are on day two, a seven-hour drive south towards Nice ahead of us, and we don't smell!