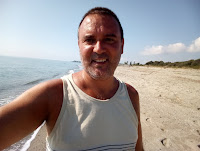 Our bikes were unlocked from the tree we attached them to five days beforehand when we decided we would spend the day on the beach to which we had walked for over an hour the previous day.

It's not unheard of for us to take the bikes to France for a holiday and for us never to use them. Considering the Nice to Corsica ferry had charged us €70 for the extra length they added, I was pleased to be using them.

Corsica didn't appear to be cycle friendly and our only option was to ride along the main road. For quite a significant portion there was a generous verge to cycle out of the way of the passing traffic, but at bridges and several places we had to share the road with the cars and lorries hurtling past.

When we left the main road to take the route to the sea, after a time, we were blocked by the grounds of a campsite. Since there was no other road route around the perimeter there was not much choice but to push our bikes past the barriers and cycle through the site.

Our navigation was spot on when we emerged down a step slope through some trees just metres from where we'd swum the day before.

It was a lovely bit of beach - very quiet considering there's a very large campsite behind. Everyone seemed to prefer the beach on the opposite side of the restaurant, which was fine by us!

In the middle of the afternoon it became cloudy and there were claps of thunder in the mountains behind and so we cycled back to camp. When we re-pitched Cleopatra the day before we'd forgotten to angle the awning so rain wouldn't collect on it and stretch the fabric. As it was we only had the lightest of rain showers and we enjoyed the evening swinging in our hammocks with a bottle or two of beer while, hidden from view inside Cleopatra, on our illegal electric stove, a white-bean casserole simmered.