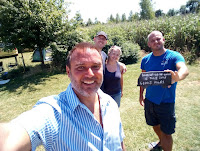 Field Barn Park in the Cotswolds is a little gem of a campsite discovered when looking for somewhere halfway between Tony and I and our good friends Heidi and Damon.

The site is adults only and, in fact, only for the over 30s. It comprises 53 spacious pitches spread over a large field planted with trees, shrubs, grasses and tall elephant grass. Pitches feel private and wild.

The elephant grass is a lovely touch, offering solitude but not feeling so forced as the privacy hedges many sites favour. The grass is so tall and dense you'd probably not be surprised to find a small Amazonian tribe leap out with spears. 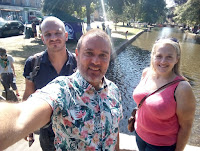 We arrived half an hour after Heidi and Damon and they were putting the finishing touches to their tent and camping equipment as we were readying Cleopatra for two nights accommodation.

Molkky, or Finnish skittles, was our game of choice for the weekend. We were introduced to it by Heidi and Damon when we camped with them a month ago and immediately bought our own set. It's a fun outdoor game of knocking down numbered pegs with the aim of acquiring a score of exactly 50 without going over.

Card games and party games were played into the evening as we tried to keep the noise down after the campsite's 10.30pm 'quiet mode'.

On Saturday we drove to nearby Boughton on the Water, a quaint village that's now become too touristy and commercialised. Coach after coach dropped off foreign tourists and British pensioners to look around gift shops full of tat. It's kind of a shame such a beautiful village with
its lovely stream flowing through the centre has turned into something so commercialised.

Rather than lunch in one of the village's expensive tea rooms or restaurants we bought provisions from the supermarket (a Co-op and still quite expensive) and had a picnic back at the campsite.

We sat in the sun all afternoon and chatted and dozed until time to barbecue hotdogs and cool enough to sit around a table together.

We all loved the campsite and I think we'll definitely use it again as a base to meet up that's a reasonable distance between our home towns.

I'll be adding it to our site recommendations page as it really is a lovely and unique campsite.