We've lost count of the number of times we've visited Île d'Oléron, France's second largest island, connected to the mainland by bridge just off the west coast. Having spend three and a half weeks on the largest island, Corsica, and six nights in the Loire, we were craving sunny beaches again. The weather forecast was perfect and it was just three hours drive from where we said goodbye to our campervan owning friends Jules and Pete.

Literally less than a minute after Tony said he'd booked the campsite he declared: 'I've booked the wrong one'. He'd booked Huttopia Les Pins when we prefer Huttopia Chenes Verts. Tony got his pine trees mixed up with his green oaks. It wasn't the end of the world. One campsite is only a 40 minute cycle from the other. Our preferred beach is a further one hour and 20 minutes away right the other side of the island. The mix up would just make us get more exercise.

We arrived at 1.40pm and I fully expected to have to wait until 2pm when receptions usually open after two hours lunch. It was open though and we were able to check in. While we were going through the formalities of check in three little boys joined us at the desk. The receptionist went on to explain we must accompany them to the swimming pool. Tony quickly advised they weren't our children and so she addressed them directly before handing them table tennis bats.

We were clutching our phones with our Pass Sanitaire, the French Covid passport, screens open. The reception said someone else had the scanner and she couldn't scan them. This was the third of four campsites we have stayed on this summer not to have bothered with the Pass Sanitaire, something they could receive hefty fines for.

We went to a nearby beach for the rest of the first day. On our next two full days we completed the mammoth two-hour cycle across the island to Plage des Saumonards. Our bikes had just sat where we dropped them for our three and a half weeks in Corsica. We'd been for a short cycle while staying in the Loire. So our two hours there and two hours back from the beach took its toll by the end of the third day. Therefore on our fourth and final day we went sightseeing in Le Château-d'Oléron, a picturesque walled town surrounded by a Bastion fort.

We bought a picnic lunch from Super U. A crusty baguette would be filled with tuna for Tony while I bought fromage de tete which translates literally as head cheese. Known as brawn in the UK, this is a pate comprising the meat from boiled pig's head. Normally I might have chosen it because it looked quite appetising and not known what it was, but I've read several books over the holiday and one had happened to mention head cheese and I chose it knowingly. It was delicious.

After the 30-minute cycle back to camp we decided to walk to a beach just north of Plage de saint Trojan. Our route on foot took 40 minutes through the forest and brought us to a lovely stretch of beach with very few others and bags of space. Looking along the huge sandy beach it started to become a little busier where we assumed access was granted by roads and cycleway. As we always know, the quietest beaches are those that require a little extra effort and we're more than willing to put in all the effort required, especially at the height of the Covid pandemic.

Speaking of Covid, we left the island today to begin the drive home and our first stop was for the Covid test booked for us by the owners of the Loire campsite in the village of Vernantes. The appointment was scheduled for 5.15pm and we arrived 25 minutes early, not least because we had to find a gate leading to the rear of the village pharmacy. The gate was easy to find but were weren't expecting such a ramshackle venue for a UK-government compliant Covid test. It was literally some makeshift benches, tables and chairs in a garage. 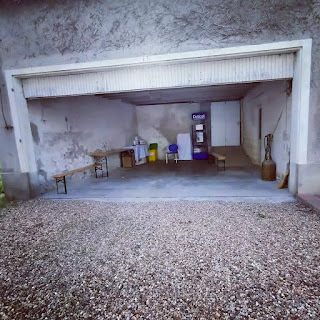 Appearances aside we were so impressed with the speed and efficiency of the test. The French method of lateral flow testing involves putting the swab up a nostril so far that it comes down your throat. I coped by just refusing to think about it beforehand and closing my eyes during the test. I was asked which was my preferred nostril(!) and then the stick was up my nose. It actually tickled and the pharmacist counted rather quickly to six before withdrawing it. I actually laughed from the sensation whereas Tony thought it hurt. Within 20 minutes we were both being presented with paper certificates of our negative Covid status at exactly the same time both our phones were receiving it digitally. It cost just 25 euros for the final hurdle (apart from the day two test which should be waiting for us at home) we've had to jump to take this holiday.

When I look back at the first photos from this six-week holiday I can hardly believe it was even the same trip. It seems so long ago. We've made a few great discoveries even though we've largely kept to places we know. On day two in France we found an aire de camping car with its own waterfall and plunge pool and only yesterday we found a stunning beach on Ilê d'Oléron we've never visited.

I never took for granted we'd get to have an overseas holiday this year and at some points wondered if it was worth the hassle. It was very much worth it and I've valued every moment.