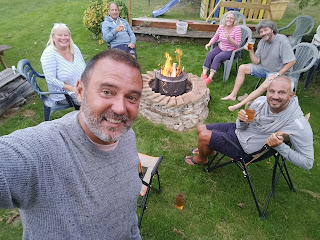 We departed Corsica with enough holiday days free that we could leave France for another EU country should France have remained on the UK government's ridiculous 'Amber Plus' list. Had France remained amber plus we would have had to quarantine for 10 days upon arriving back home and so had a Hook of Holland to Harwich ferry on standby. In the end, France was put on the amber list before we'd left the island and so we were free to remain in France and mooch around for another 10 days.

Our friends Jules and Pete were in France in their campervan and we arranged to head up to their campsite for their last six nights. We arrived at Le Chant d'Oiseau at lunchtime and were warmly greeted by campsite owners Stu and Syb who had saved us the corner pitch we stayed on last year where there were plenty of big trees for our hammocks to hang.

This year's stay was to be a far more joyous occasion than last year's when we weren't intending to be at Le Chant d'Oiseau at all, but went to support Jules after Pete was taken seriously ill in various hospitals.

Le Chant d'Oiseau is a small campsite with just 10 pitches arranged around the edge of a field in the western Loire valley countryside. It's an idyllic rural location with forest walks and village to village cycle rides on the doorstep. The site also has a good-sized swimming pool, petanque court, and children's play area. A bar is housed in an open-sided barn in which you can enjoy meal nights should you wish. There are pool and table tennis tables here too. A campers' kitchen houses dishwashing facilities as well as microwave and communal fridges. The shower and toilet facilities are adequate for such a small campsite. There are gites for those who prefer a little more luxury.

We enjoyed mostly sunny weather and often did nothing more than sunbathe, swim and lay in our hammocks. We also played Molky and petanque, and taught Jules and Pete how to play the card game Tichu.

After having made up our minds to visit Jules and Pete and realising we didn't have board or card games for four people, I ordered Tichu from Amazon's French website and sent it to their campsite. We'd end up playing three full games, Tony paired up with Jules, and Pete with me. If you often socialise in a group of four I highly recommend this card game.

When we did leave the confines of the campsite we enjoyed a walk around the quiet lanes on one day, and on my birthday, a bike ride to the large lake at Mouliherne where we had a picnic lunch.

We had a barbecue on my birthday evening, the food expertly and kindly cooked by Stu. Pete made his signature cheesecake, a slice of which was brought to me bearing candles while a chorus of Happy Birthday was sung, and Stu very generously handed out glasses of Champagne.

Since my birthday fell on a Tuesday we spent the evening in our weekly Zoom pub quiz. Tony and I have been running the quiz since March 2020, when we were at the beginning of the first Covid lockdown, as a way to socialise from home. Since Jules and Pete are one of our regular quiz teams we sat apart from them, who this week were joined by Stu and Syb. It meant the other teams couldn't hear them conferring but Tony and I heard their laughter and them continuing to sing a couple of Abba songs until they reached the name of the tune at the end of the chorus.

Stu and Syb will book pre-return Covid tests at the local pharmacy for you and, since this was infinitely preferable to trying to book something ourselves, we gratefully accepted. We decided to have four of our final five nights on Ile d'Oleron and came back through Vernantes where our Covid test appointments were scheduled.

We left Jules and Pete packing up for their return trip home, recommending a little campsite not too far from Calais for their final night in France. We headed west to Ile d'Oleron, the island we adore off the west coast of France.