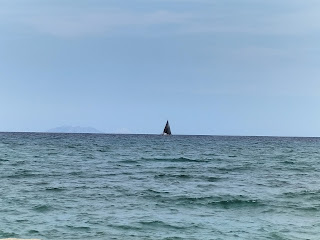 For the first time this visit, or on any visit come to think about it, we can see two small islands from the beach. The one you can see in this photo is, I believe, Pianosa.

We've fallen into a comfortable and familiar routine that campers often do of being up with the sun and in bed just after dark. I don't like to go to bed too early since I hung up solar fairy lights in the trees just in front of our camping spot and they look lovely. It's nice to see them come on as the sun sets over the mountains. They do seem to be confusing a cicada though, which continues to chirrup as though it's still daytime.

So we're up fairly early, sitting outside with a cup of coffee as the sun rises over the Mediterranean. We walk the 15 minutes to the decently-sized E LeClerc supermarket to buy supplies as it opens at 8am. I can't resist a baguette for breakfast. For the first three days I filled it with ham and cheese. Then I purchased a delicious chunky paté, and today I fancied tapinade, which I'm not sure is really a breakfast spread but it was made in Corsica, I enjoyed it immensely and it will last me several days. Tony is being virtuous and buying fruit and Greek yoghurt.

Every day we're tempted by a different local beer to take back and pop in the coolbox for later. Though the poor coolbox is struggling a bit to make anything particularly cold, the contents are a lower temperature than had they been left anywhere else!

We have another coffee or two with breakfast and are typically setting ourselves up for a day on the beach by 9.30 to 10am.

Our Decathlon tarp is proving a blessing on the beach with a generous shady space beneath for us to doze or read our books.

The beach is even quieter than usual today. Saturday saw several yachts anchor offshore - we're probably on the nicest sandy beach from the harbour I'm assuming to be in Bastia where we came in on the ferry. The campsite emptied somewhat yesterday and of those that remain, many won't venture from the shade until 7 or 8pm when they have a little swim in the sea and return to their encampments.

As I relax more and more, I spend longer and longer engrossed in my books. So you're lucky I put it down to write this!