No aire at the aire 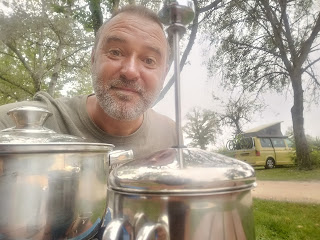 Our two planned over-nighters, the night before and the night after the Corsica to France ferry didn't go to plan. We'd have been better staying put at Camping Amurucciu and driving the hour to Bastia port rather than getting ourselves 30 minutes closer on the vineyard we've used twice before. The vineyard was not accepting campers for some reason. Fortunately it was only just past lunchtime and we still had time to look for alternatives. We found Camping A Stella just ten minutes further up the road and checked in for a night for 25 euros. There were a couple of stunning beachfront pitches available but both were close to steps down to the pebble beach and the last thing we wanted was people walking past our pitch. In the end we sited ourselves out of the way beside a dried up river bed and went to spend the day on the sandy beach just the other side of a rocky outcrop. It was pretty stupid for Tony to climb over that with his ankle still recovering from major fractures and dislocation, especially in flip-flops but we were half way over before we realised it wasn't so easy as it looked.

We were up at 5am to drive to Bastia and our 8am ferry. The ferry left exactly an hour after it should have done with no explanation. As time ticked on I started fretting about what the hold up was and had visions of there being something major wrong with the ship and being asked to disembark. Further, I imagined we'd be stuck on the island while they tried to get hundreds of vehicles on other crossings over several days. I was very relieved when the boat began to move at 8.58am. When we arrived at Nice the ferry had to wait briefly while another left the small dock. I wonder if that was the ferry that was actually running late and delayed our departure and subsequent arrival. We'll never know because it was as though they were just pretending nothing had happened.

After negotiating the traffic nightmare that is leaving Nice (we will definitely be using the ports in Toulon or Savona in future) we were later than we hoped making our way north through France towards Clement Ferrand. We mulled over finding an alternative to our planned overnight stopover because it would be dark when we arrived and we still fancied being able to enjoy an evening with as glass of wine and dinner which was to be mixed bean salad with tuna. In the end we decided to push on and we arrived in the beautiful town of Charroux at 10.15pm. On our cycling visits to the town when staying at nearby Domaine les Gandins we've seen motorhomes parked on a large grassy field and always said that would be a lovely place for an overnight stop. Unfortunately the large grassy field has been developed into a car park and a sign says no camping cars. It goes on to say that the town has reserved a spot for motorhomes though and to visit the tourist information office for details - something you cannot do at that time of night.

So already tired from a day of traveling we still had nowhere to stop. I googled aire de camping cars, which I now know it's stupid as some can just be service points for water top ups and disposal. However we were in luck because the one we headed for 15 minutes away was part of the chain Camping-Car Park. An illuminated bollard said open 24/7 and after negotiating a registration screen I was able to check us in for the night for the very reasonable price of £13.50 including electric, toilets and showers. Future stays on this network of aires will be cheaper since 5 euros of that price was for a proper plastic membership card.

Since it was now almost 11pm we just popped the roof and went straight to bed. Yesterday was great for our diets since we'd only eaten a cereal bar and packet of crisps all day.

We made ourselves coffee on our gas hob at a picnic bench this morning. The electric hook-up cable was buried too far away the back of the boot for us to bother digging it out.

We're now back on the road heading towards Mouliherne for a lunchtime arrival at our base for the next seven nights.