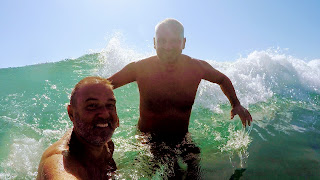 It's normal to feel down at the end of a holiday and this isn't even the end, just the penultimate night on this beautiful island. I feel a mix of emotions. I'm sad to leave but I'm enormously grateful for the chance to have had this holiday given the circumstances. Then I feel guilt at even contemplating a foreign holiday while most people have had staycations. I've felt far safer at Camping Amurucciu than I ever would have done on a crowded campsite in the UK though. That said, whatever anyone had planned for a break this year they look as though they've enjoyed which is fantastic; we all deserve it, I think.

I thought I'd feel bored having stayed on one campsite for the entire duration. We've made Amurucciu the first site of each of the two previous visits to Corsica because it effortlessly gives us the beach fix we've craved. I think we've stayed six or seven nights at the maximum on either occasion. They don't call Corsica 'Île de Beauté' for nothing and we soon want to get exploring. So almost a month without upping sticks should have been hard for us. I think it's feeling safe on our spacious beach-side pitch and an unwillingness to move somewhere unknown, plus a huge contentment to be here at all. I know we'll be back next year and even then we'll likely start the trip at Amurucciu, but then I want to walk in the mountains, swim in freshwater gorges and finally get to see the sixth century statues and menhirs that are continually being uncovered on the island.

Tomorrow we will stay on a vineyard closer to the ferry as we've done the last two years we've come to Corsica. We'll take an off grid pitch under the trees, a huge area we've only shared with a couple of other families previously, so it'll feel like a safe space.

We discovered Corsica three years ago. After the first year we said we'd loved it but it was rather a chore to get there and probably wouldn't be back. But there's an inescapable draw pulling us back and we returned to the island of beauty the very next year venturing further south and west. I was sad not to get here last summer. In the height of the pandemic Corsica is the only place I wanted to be. We made it and we'll be back again!