The night before the Bastia to Savona ferry 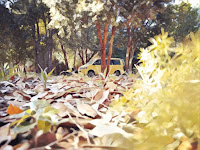 A locked door at the reception of Casa di Luna when we were ready to depart was affecting many people. A few, like us, were waiting to pay their bills, collect their passports and leave; others were hoping to pick up the baguettes and croissants they'd ordered for breakfast.

Two people arrived to man the reception almost simultaneously at 9.15am. The lady had been cleaning the shower blocks while the man was titivating parasols and deck chairs around the pool. Whether one thought the other was manning the reception wasn't clear but it was frustrating to have been delayed on our last day. I'm afraid I knocked two stars off the five-star rating I'd awarded on Google Maps for the experience.

Once I'd been reunited with my passport and paid the bill for our four-night stay we were able to journey north, almost completing the loop on our circumnavigation of Corsica's coast.

We discovered Domaine de Caterelli on our last day in Corsica last summer. We'd spent a whole morning looking for a campsite without a barrier in order we'd be assured an early departure to catch the ferry. We made it our final night's camp this time around too, being just half an hour away from Bastia and our 7.30am Corsica Ferries crossing the next morning.

It was 21€ for the night and we'd elected not to have electricity. It meant we were free to choose a spot under the shade of trees with only a single other tent for company. We just parked up, forgoing any kind of setting anything up, and headed to the beach just behind the camping places. 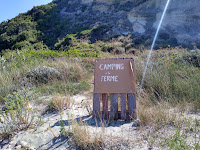 The beach is a smallish cove shared by the campsite, a hotel and a pool and snack bar. It was the busiest beach we'd been on in our three-and-a-half-we'll stay on Corsica. Still, it felt more like we were just passing time until the ferry the next day than trying to have a relaxing beach day. We sat for a couple of hours, Tony reading his Kindle and me having an unsatisfactory swim surrounded by seaweed that just ended up stuck all over me.

We gave up the beach in favour of our hammocks in the shade of the trees. We opened some beers and relaxed a while before making a simple dinner of fish finger baguettes for Tony, slathered with mayonnaise, and hot pork baguettes for me, with plenty of Dijon mustard.

We took the dishes to wash at the same time as showering, having to queue while an Italian family took far too long occupying all three shower cubicles.

We applied copious mosquito repellant and swung serenely in our hammocks until it grew dark, glugging down merlot. An accident with a ten-litre wine box a couple of nights previous had us trying to manage the liquid in only its inner bag and even this had burst when we opened the plastic box we'd placed it in. We decanted a litre into our plastic, erm, decanter and left the leaking bag in the plastic box for the next evening. 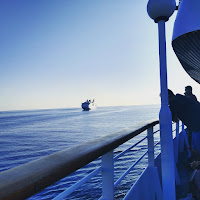 I had a restless night, as I always do when I need to be up early to catch a ferry, plane or train. We both had alarms set on our phones, so there's no need for me to worry but I still do.

At 5am two phones played the same alarm sound and we climbed down from the pop-top bed. It was still dark as we changed into our day outfits, no need for any kind of modesty in the pitch black. All there was to do was bring down the roof and drive east towards the rising sun.

There were no complications boarding the Sardinia Regina, the same ferry that had brought us to the island. Once again Cleopatra was the right size for boarding first and we were on the sun deck of the ferry, nabbing deck chairs before anyone else. 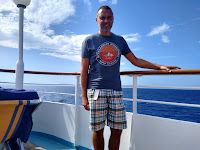 This time we brought our swimming trunks, though I was the only one of its to take a dip in the pool. It was delightful to cool down but I hadn't bargained for the salt water and it left me feeling unclean, the salty residue making my skin feel crusty as I dried off in the sun.

We were also one of the first vehicles off the ferry when it docked in Italy, ready to tackle some bigger roads than we'd seen for some time on our way up into the French alps and Huttopia Bourg Saint Maurice.