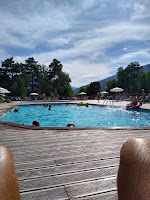 Avoid the Frejus Tunnel. That was our main priority when choosing a route from Savona in Italy, where our Ferry from the island of Corsica had docked, up into the French alps. At £54 one way (you can buy a return but it has to be used within a week) it adds a considerable cost to the journey. Google Maps offered up three routes and there was less than 15 minutes difference between all of them.

Eventually Italian motorway became slowly winding roads up into the mountains. The higher we climbed the lower the temperature dropped - quite a shock to the system after Corsica's scorching heat. 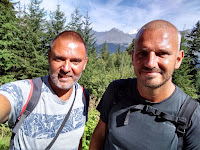 Bourg Saint Maurice sits in a valley below the ski resort of Les Arcs. We were pleased to see temperatures getting back up to the mid twenties as we made our way down into the town. We arrived at Huttopia Bourg Saint Maurice at 6pm. It had been a long day of traveling with the five-and-a-half-hour ferry crossing but we didn't want the whole day to have been about traveling. We resisted the urge to just sit down and rest and went off to explore the town.

We chose Bourg Saint Maurice out of curiosity for what it would be like as a winter holiday destination. For the last three years we've been going to Venosc, a cable car ride away from the ski resort of Les Deux Alpes. Although we absolutely love spending a week there in the snow it seems a shame not to discover somewhere new. 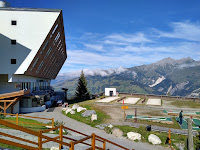 Immediately the differences between Bourg Saint Maurice and Venosc were apparent. The Huttopia campsite is vast with dozens of camping pitches and clusters of safari tents and other glamping units. Right on the doorstep are large Super U and Intermarche supermarkets and the sizable town of Bourg Saint Maurice has a train station that's on the Eurostar route. Compare that to tiny little Venosc nestled in to the side of a mountain with a small number of dwellings arranged around a steep cobbled footpath. 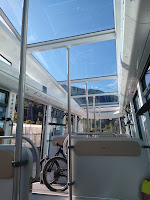 We had two days to fill and on our first we caught the funicular railway up to Les Arc 1600. It was 7€ each for a single ticket. The journey takes less than 15 minutes. From here we wanted to spend the day hiking and we located the tourist information office to find a map. A lady behind the counter was incredibly helpful and matched our needs with the perfect walk. We'd spend a couple of hours on a reasonably gentle incline walking along the Chemin du Canal up to Les Arcs 1950.

Seeing a ski resort out of season is strange. The mountains are beautiful and the skies clear blue so there's every reason to visit in the summer. We were walking up what would be a busy ski slope when covered in snow. Walkers were sharing the path with mountain bikers. Some of the ski lifts were in operation and they had bike racks fitted so bikers could cycle down the slopes skiers would use in winter. 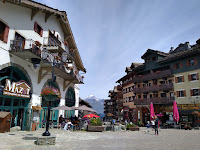 Arc 1950 was charming with pretty bars, restaurants, shops and hotels along a pedestrian street. Everything was immaculate, owing to the entire resort having only been opened in 2003. Cars were missing from the scene and they were parked beneath us in an underground car park. A big win for Les Arcs is that the entire resort is pedestrianised. Les Deux Alpes on the other hand is just traffic chaos with cars lined up along its streets trying to find a parking spot in grey slushy ice. However, Les Deux Alpes feels more authentic with shops you want to buy from and bars you'd enjoy drinking in. Les Arcs 1950 could have been built by Disney and the prices in the shops and restaurants matched. 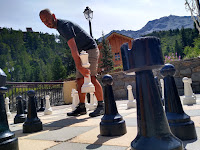 We stopped at a giant chess board and tidied up the pieces - I just wanted to see if they were all there but we ended up playing a game. Occasionally we had spectators and I'm not a good enough player to be comfortable being observed. Fortunately nobody was looking when a stupid mistake had Tony take my queen with a pawn. I lost as I'd expected to.

A free cable car was running between Arc 1950 and Arc 2000 so we hopped aboard. Arc 2000 was older and mostly comprised huge and ugly hotels. From here a range of hiking routes ran here and there. We went off in search of a lake but instead found ourselves at a reservoir. Signage informed us water from the reservoir was used in the snow machines to ensure a good coverage of snow in order that the skiing season was guaranteed each year.

Deciding we'd walked far enough we consulted the bus timetable we'd been given by the lady in the tourist office. We had fifteen minutes to walk back to Arc 2000. That would be quite a push and we didn't know where the bus would leave from or even where the road was.

With three minutes before the bus should depart we were in a car park. The car park must be connected to the road, I helpfully pointed out. Walking to the corner we expected to see the road we found a dead end. There was a bar with outside tables and a door. Luckily the door went through to a lift down to the street below and the bus which was just pulling away. The driver stopped when he saw us and allowed us on.

We disembarked the bus where it terminated at Arc 1600 and discussed our options for returning to Bourg Saint Maurice. Tony estimated the walk down would take a couple of hours. Instead we bought two more single tickets for the funicular railway.
We arrived back at the campsite with enough afternoon left to sit by the pool. 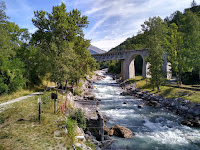 On the second day we cycled to Aime. There were two reasons to cycle to Aime and one very good reason not to. In its favour were that that's where the cycle path goes to and that, once there, there's a Decathlon sports shop. We had a few things on a shopping list we wanted to buy including an additional two longer ropes for our hammocks, a replacement pair of water shoes and water bottle. We ended up buying a double hammock as well as the two longer ropes, meaning we now had with us hammocks to accommodate five people should we wish!

The reason not to cycle to Aime was that it is downhill all the way there and thus uphill all the way back. Rather than cycle back uphill we caught the train. It was seven euros for both of us. We don't know if we should have paid extra for our bikes - there didn't seem to be the option to add them on the ticket machine and nobody checked our tickets anyway.

Would we like Bourg Saint Maurice and Les Arcs at Christmas? We discussed it that evening and decided not. The tiny fairy-light-lit houses in Venosc and small and friendly campsite Champ du Moulin are what our Christmases are about, not Disneyesque Les Arcs with its arrivals by Eurostar.