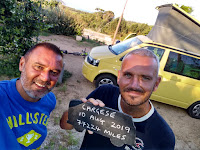 "Chaussée déformée", uneven road surface. I wondered why they didn't even out the road rather that erect a sign. The chaussée was deformed for a very long way though so the putting up of a sign was certainly the quicker and cheaper method of dealing with the problem.

It looked like we'd picked the wrong route along Corsica's west coast to our next destination. Google Maps offered up another choice through the middle of the island, adding 50 kilometres to the distance but only a few minutes to the time of the journey. As we approached Ajaccio the roads gradually improved, so much so that I was able to pour water from the boiling travel kettle in my lap into the cups in Cleopatra's cup holders in spite of the warning not to use it while the vehicle was in motion.

In Ajaccio, only ten seconds from our route, was the biggest Leclerc supermarket I've ever seen. It turned out to be the biggest supermarket of any chain I've ever been in. We could have spent hours in it but wanted to arrive before noon at Camping Mandriale in Cargèse. We had an eclectic shopping list of leeks, beer and a mallet. Leclerc offered up solutions for all.

After another hour's drive on decent roads we pulled up outside the campsite reception. While Tony went in search of the toilet I loitered in the reception area until the owner appeared, beginning as always on these occasions with 'Bonjour. Parlez vous Anglais?'

'Of course,' he said, as if it were obvious. Until now we've generally been met with 'non' or 'petit', so it definitely cannot be taken for granted on Corsica where visitors, of if not French, are a hundred times more likely to be Italian than British. It was refreshing to be met with such a warm welcome after the indifferent attitude at our previous site. We were soon finding a pitch to our liking.

Camping Mandriale is a working farm. Up a hill are tent pitches, which looked lovely, while at reception level were hard standing pitches for motorhomes. All other motorhomes had sited themselves under a huge green net offering shade, until the trees mature. I thought it looked grotesquely ugly and we pitched in front, on a corner plot with a view of the sea. We'd only be on site in the evening and at night so shade isn't a huge priority. 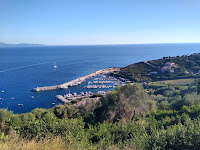 In addition to a glimpse of the Mediterranean, we were overlooking the animals. There were cows, sheep, chickens and goats, much to be expected on a farm. There were also rabbits, llamas, deer and donkeys.

Once pitched we set out on foot for Plage de Chiuni. It took us about 45 minutes to walk to this beach in the midday heat. We passed some horrid looking accommodation I likened to a prison and Tony to staff quarters. This turned out to be Club Med - not the image you'd probably imagine nor the one pictured in their publicity material.

The beach was long and sandy and busy. By busy I mean there were people on it and we like beaches without. We consulted Google Maps satellite view, identifying a couple of small coves if we followed a path across scrub land. Of course we did, as we always do. There was someone on the first beach and a boat anchored in the cove too, so we walked to the second. There was someone here too, and another boat, but the beach was longer and we found a spot at the other end to the man and his umbrella.

The walk back was more difficult as the uphill section was steep though fortunately shaded by trees. Sadly, in which ever direction you want to walk from the campsite there's no pavement and the main road has fast-moving traffic. 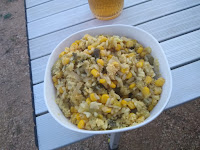 We made sweetcorn risotto for dinner, our reason for needing leeks from Leclerc. It was simple to prepare in one pot and delicious - perfect summer food.

We enjoyed beer and merlot as the sun went down and then a very annoying thing happened. As soon as anyone walked past they activated several floodlights on the facilities block. These were bright as can be and quite startling when your eyes have adjusted to the dark. You should be able to appreciate the stars in the night sky when you're camping and these lights are far too bright, spread their light far too far and are an intrusion.

A nice breeze blew through the windows in the pop-top roof during the night and we slept well, until the cockerels decided to announce the new day about four hours before we were ready to meet it.

We decided to cycle to Plage du Pero once we'd reluctantly got up. If the cockerels hadn't managed to rouse us, the heat building inside the van from the sun certainly would.

It was an easy cycle of about ten minutes. There were no little coves to discover so we just set ourselves up with the other beach goers for the day. There was so much beach it didn't get cramped but regrettably I started to get tan lines where once there were none. 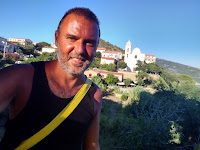 At 5.30pm we left the beach to visit the town of Cargèse, much easier said than done, even when you've no idea how to pronounce Cargèse. We pushed the bikes most of the distance up the steep hill and locked them next to the roundabout at the top where there was traffic chaos just like when we'd driven through two days earlier.

My little piece of research of the town highlighted that the two churches were a must see. They face each other, separated only by a vegetable garden. One of them is Roman Catholic and the other is Greek. The priest gives mass in one and then the other.

The ride back to the farm was easy - it was downhill all the way. We slept a little better, not hearing the cockerels until a more reasonable hour. I'd set an alarm for 7.20am just in case, so we had time to pack up and be ready to leave when reception opened for us to pay at 8am. 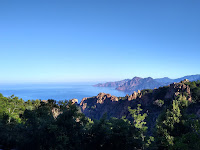 The drive even further north was along narrow, winding coastal roads carved into the rocky rocky mountains. It was a little hair raising at times but it afforded absolutely amazing views down to the sea. So early in the morning the light was creating vast shadows in the crevices so that across the deep-blue sea the mountains were dark green, almost black, in the shade and pastel where the low-in-the-sky morning sun illuminated them.

I videod the section of the drive through Piana, known as the most beautiful village in France. Its little houses sat between the natural rock formations, tiny little terracotta-topped boxes upon stone weathered over millennia. It really was a pretty village indeed and, if my stomach could have coped with the roads, one in which I could see myself living.