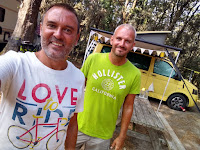 After three nights in the alps we had two nights at Huttopia Etang du Fouche, a campsite on a lake not far from Dijon. Aside from the lake, which folks were swimming in, there wasn't an awful lot to do in the vicinity and two nights was certainly enough. It wasn't a lake I'd have wanted to swim in either, fully of smelly lily pads, so we walked and cycled.

After that we had to return home for two nights as Tony needed to be at work for exam results day, hence our gradual journey north from Corsica.

At 1pm on Thursday Tony was home from work and we set off to cross the channel again. We made such good progress that were were able to amend our Eurotunnel crossing, bringing it forward three hours and then getting a train even earlier than that. By 11pm we'd made it to the Vendee and our all-time favourite aire de camping car in Saint Michel Mont Mercure. 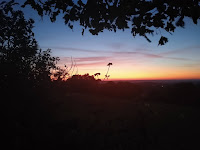 As we entered the village the church was illuminated and the gold statue on the spire was glowing in the light. We climbed up to the aire which is right beside the church on the highest place in the Vendee. The views from here are stunning and it's one of the reasons this aire is our favourite. However since we arrived in the dark and would leave in the dark it was a little wasted on us on this occasion. 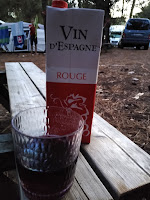 We were back on the road at 7am, heading just over two hours away to Ile d'Oleron. We stopped for beer and wine at the Lidl just before the bridge across to the island. We found our cheapest wine to date, 1.5 litre cartons of Spanish red and white for one euro each - about 45p per bottle!

At Huttopia Chenes Verts (Green Oaks) the girl behind the reception desk remarked how early we were but flipped through her papers to find ours and checked on her computer to discover our pitch was vacant and therefore we were welcome to pitch up. It was 9.30am in the morning and meant we could enjoy a full first day on the island.

We had to change a bike tyre before we could be on our way to the beach, but that was soon done and we were on the beach before lunch.

This was the first time we'd been in the sea for a week and it was a lot colder than it had been in Corsica. We soon got used to it and there was no apprehension about taking a dip to cool off. 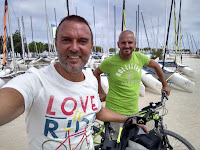 With cloudy mornings on days three and four we took the opportunity to cycle to some of our favourite places - this was our seventh trip to the island and kind of have a routine. We cycled 56kms to the lighthouse and back via the opposite coast one day and visited Le Chateau the next.

The campsite was full on our first night which was charged at peak season rate. Our other six nights were off-peak rate and the campsite has gradually emptied. 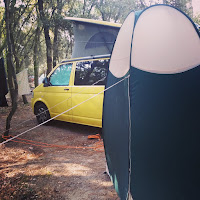 The pitch to the left of us still has a German family staying in a caravan. They come home late on their bikes and make little noise. One evening the mother came over to ask about our utility tent. 'My little girls want to know what the guys have in their little tent,' she said.

Rather sheepishly I replied: 'A bucket'. She looked confused so there was no alternative than offering a full explanation that it was to save us walking all the way to the toilet block.

As she explained this to one of the girls she used the words 'pee pee'. The little girl's expression showed that she was unimpressed. Either she was hoping for something more exciting or just horrified we wee in a bucket, I do not know. What we do know is we're more self conscious about disappearing into the tent now!

We're on night five of seven today and so the end of our six-week summer road-trip is firmly and sadly within sight.