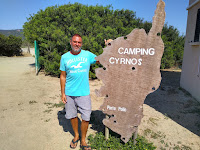 Camping Cyrnos is a simple site on a rectangular field sitting amongst agricultural fields on the west coast of Corsica. It is right on the beach and shares the beach with no other residences. It sounded perfect when I found it on Google Maps and looked pretty perfect when we rolled up at 10.30am on Saturday morning.

I found the welcome from the man at reception lacking any warmth. We could stay but he didn't seem to mind one way or the other. However we were allowed to find a free pitch and return to book ourselves in, handing over a passport as seems the norm.

The site was about 80 percent full and, of the occupied pitches, it looked like most campers had been and would be here for a while. We chose a pitch at the top of the site, a large square pitch with a sycamore tree at each corner we thought would provide shade. The pitch would be 31€ per night, not the cheapest but not the most expensive on this trip to date. The premium seeming to be warranted by the location rather than facilities which were adequate if a little dated. 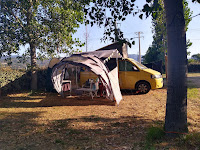 We chose to put up the SheltaPod for the first time in the hope that we'd like this place enough to stay a little longer. As the pitch we'd chosen was a fair distance from the facilities we also put up the utility tent with our bucket to wee in. I can't properly enjoy a few cool cold beers of an evening knowing it's going to be a long trek each time it's ready to come out the other end!

And then we hit the beach. A long stretch of white sand that the site shares with almost nothing else. A car park to one side would fill up with a few families and kite surfers during the day but in only a five minute walk we found we could have a dozen football pitches worth of beach to ourselves. 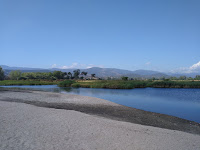 One amazing characteristic of the beach to the east of Camping Cyrnos is that a river flows into the sea here and creates a long sandy bank where it meanders parallel to the sea before gently flowing into it. We would sit with the Mediterranean in front of us and the river and marshland behind us. The river-facing view reminded me of scenes of Kenya and I'd not have been at all surprised if a hippo had popped up its head.

Much as we'd loved the other campsites we'd stayed on so far, most had been located where there wasn't much to do. We'd had five nights at the beach where the only thing to walk to was the Leclerc supermarket, the site in the mountains where, once you've canyoned in the gorge, you've done everything, and the site near Bonafacio that, once you've visited Bonafacio, serves no other real purpose. Cyrnos showed great promise at providing us with walks and bike rides in the mornings and lazy beach-side afternoons.

I'd actually picked the site because I wanted to visit the standing stones at Filitosa and we could get there on our bikes. But in the end we haven't yet, and probably will not go. I've since discovered it would €18 for us both to get in, a price many Google reviews said just wasn't justified.

It mattered not that the reason I discovered the campsite wouldn't ever see a visit though because we filled our mornings with a walk into Porto Pollo - the town along the beach to the west, a five-hour hike to Tour de Campannella - a tower you can climb to the top of, and the Tanchiccia nature reserve complete with lakes and bird hides.

Today is day four and there is the town to the east not yet visited and other possible mountain walks to amuse ourselves with.

But back to what we've done so far. Porto Pollo is a nice little town with a nice little harbour filled with nice little boats. It has an expensive Spar supermarket that closes between 1pm and 4.30pm but small baker and green grocer shops that are open all day. On our exploratory first walk we passed the footpath signs that would lead us to the tower the following day. 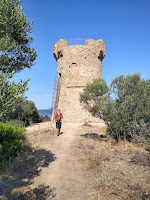 The initial section of the walk to Tour de Campannella was a pretty steep climb uphill. We were soon hot and sweaty, Tony dealing with it by wearing no t-shirt but then also refusing to have any photos taken because he was wearing no t-shirt.

Google Satellite view helped us locate the correct path at the top of the mountain and we'd soon see the tower come in to view. I was delighted to see the ladder up to its door way half way up and that visitors were free to, erm, visit for free. Only a couple of rungs up I had second thoughts. The ladder was vertical and the steps tubular steel. But I continued up and into the central floor where yet another ladder of the same characteristics awaited. I looked down for Tony who wasn't right behind me after all and declared that he wouldn't be coming up. 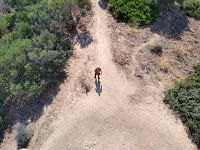 I made it to the top of the tower and tried not to think of having to get back down again. Great views were afforded of the beaches beyond and back down at Tony, amusing himself while I did likewise atop a castle.

From Tour de Campannella there is a coastal path that passes tiny sandy coves until you arrive at Cupabia beach where we plunged ourselves into the sea to cool off. We found the whole walk could have been done on an almost flat path and followed this route home.

Today we visited the nature reserve, just a fifteen-minute walk from the campsite. There's free entry and a manned reception offering maps. We wandered around the lake and into bird hides. Information panels boasted dozens of birds to see but we only saw coots.

Every day has seen us lounging on the beach after our morning pursuits. It's a lovely beach and the sea gets deep very quickly making swimming a joy. There's often quite a wind which is why the beach is popular with water sports enthusiasts.

Evenings are being spent with some cool beers and warm merlot while we cook dinner and generally chill out in the peace and quiet. Although the site is busy with many large families spread across multiple pitches, people are fairly quiet. The noisiest thing we've encountered being a watering canon in the adjacent field that continued knock-knocking from 8pm to 8am. I'm hopeful the field is sufficiently watered that we won't hear that tonight.