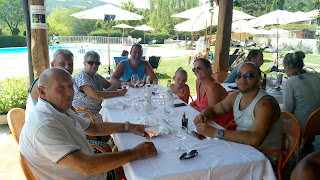 Heatwave Lucifer hit Italy just as we travelled south, for eight nights at Campsite Il Collacio in Umbria. Temperatures were around 35 to 39 degrees C and so we made the most of our campsite's two swimming pools for much of our days.

My family flew out to join us for seven nights. The trip was a surprise for my mum's 70th birthday. All she was told was that Dad was taking her somewhere hot that wasn't by the sea. She thought my brother Ben and his family were only taking them to the airport and so the first surprise was revealed when they parked in the airport's long-stay car park and joined them on the flight to Rome.

At around 4pm in the afternoon their car pulled up at Il Collacio. Tony and I were sitting by the pool and saw them, over the hedge, getting out of the car. I'd told Mum we were in Lichtenstein and was even checking in to places on Facebook to throw her off the scent. She was completely surprised to see us and the birthday surprise even made her cry.

Their party of five had booked a wooden chalet for the week and Tony and I cooked meals in their basic kitchen all except one night when we ate in the campsite restaurant.

Il Collacio is a family-run site with a friendly but upmarket feeling. Most of the camping pitches enjoy fantastic views over the beautiful green landscape - there are nothing but hills, dotted with small villages all around. Our pitch was mostly shaded - a bonus given the soaring temperatures - but its view was partially obscured by the wild undergrowth on the other side of the wire fence.

The site has a choice of two pools. The main pool sits at the top of the site next to the bar and restaurant. There's a large area of grass on which to spend days lounging. Deck chairs are provided and attentive staff will greet you and set up chairs and a parasol for you.

The slightly smaller pool is further down the terraced hill. It has a small bar and smaller grassy area, some of which is shaded by trees. Both pools are pleasant to sit around with, for me, neither having an advantage over the other. You must a wear swimming cap in both pools. 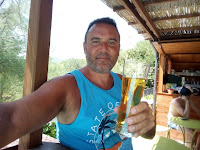 We found the bar to be expensive, with a large Perroni beer (660ml) just short of four euros. At a bar in the little village below the campsite they were half the price.

We asked at reception for information on local walks and three colour printouts of maps and walking instructions were offered to us. We completed all three walks over consecutive mornings. The local landscape dictates that walks are going to be hilly and some parts were rather testing. We enjoyed all three walks, including one to the village of Preci where we drank coffee in a small cafe before heading back across mountainside that afforded stunning views over the countryside below and taking us through the ancient town of Castelvecchio.

Both Preci and Castelveccio were damaged during earthquakes last year and sections of the towns are fenced off. Another walk led to us discovering a small bar in the village at the bottom of the campsite's hillside. Run by a sweet Italian couple with whom we conversed through mime, the beers there were half the price they were charging in the campsite bar.

Although Tony and I had our bikes with us we used them just once. It was too hilly to make a bike ride anywhere near to enjoyable. As it was we used them to cycle down to Preci for a second visit as we'd missed visiting the old town up on the hill the first time. The ride/walk back up the campsite terraces was as nightmarish as feared but a long dip in the pool soon cooled us down again. 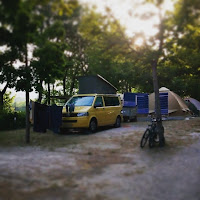 I found Il Collacio through Cool Camping and it proved to be as good as it was made to sound, not just for our requirements but also for my family who like a little more luxury on holidays. I know they'd have appreciated air-conditioning, especially on the last night when temperatures were still 30 degrees at 11pm. The camping accomodation and the chalet were reasonably priced, though the onsite shop was expensive. Fortunately Tony and I stocked up at a Lidl on our drive there, while my family found a good Coop supermarket in nearby Norcia for most of their requirements. A plentiful supply of beers were always forthcoming from the fridge in the chalet.

The site facilities are good and well maintained. Our only annoyance was the friday evening entertainment (Our eight-night stay spanned two Fridays). Live music next to the site's restaurant kicked off at 9.30pm and went on until 11.30pm. Camping should be about peace and quiet in natural surroundings and while we were relieved to find the entertainment was only one night a week, I think 8-10pm would have been a more suitable time, especially since changeover day for the chalets is Saturday and many people are likely to have a long day traveling ahead.

We'd certainly go back again, as would my family, so all round it was a great choice and I wouldn't hesitate to recommend it.