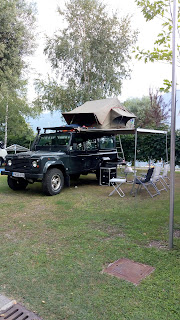 We were spoilt on the first two weeks of our Italian adventure. Tuscany gave us a pitch with fabulous views and mainly sunny weather. Going further south to Umbria we found ourselves on a five-star campsite and 40 degree heat.

Our third week required that we started heading back north and we chose the Italian lakes. A few years ago we stayed in a hotel on Lake Garda. This time we decided to give Lake Como a try and booked Camping La Riva on the northern tip.
I say northern tip but that's kind of stretching it a little. It's on the river slightly before it flows into the lake.

We had a warm welcome by the site owners and were shown to our pitch. I'm afraid this isn't the kind of site we enjoy. Firstly it has semi-permanent caravans that have what I can best describe as wooden shanty towns built around them. Secondly there are just too many camping units crammed in. Our pitch was between the road and the river, but the pitches are two deep, so in front of us, obscuring our view of the river, was a caravan. The two pitches to the right of us must have to be booked as a pair because there's no access to the riverside pitch if the one behind is occupied.

Finally, another pet hate is showers that require money or tokens. Here it's one euro for a four-minute hot shower. For a couple that likes to shower morning and night, that's 28€ extra for a week. We begrudgingly paid for one hot shower a day each. I've been having mine in the morning and having a cold shower to cool down on the evening.

Then there are the issues you cannot directly blame on the site owners, but which would-be campers ought to know about (but the site information doesn't tell you). You're going to get bitten to death.
Everything is lovely until about 8.30 at night. As the sun goes down thousands of mosquitos descend on unsuspecting campers. On our first evening, in half an hour I'd got 20 bites. Even knowing that was going to happen on subsequent nights and spraying insect repellent all over me didn't stop them. By day three my body was almost one big bite.

Having cycled around the lake I can see that La Riva is by no means the worst at packing camping units in to a small space - some others are horrendous - but given the mosquito problem on top of feeling like a sardine, if you are thinking of camping near Lake Como, I'd try to find a site that isn't on the waterfront where space might be less of a premium and there may be less insects with a hunger for your blood.

I've blogged about what we got up to on our days out around the lake in the next blog post, but suffice to say despite the campsite not being to our taste, we had a great time.