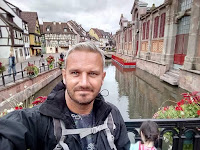 Having been as far south as central Italy on our three-week campervan road trip we were on our way north again and our final stop before home was Colmar.

We'd previously enjoyed a week-long city break in nearby Strasbourg and Colmar promised similar with its 13th century Renaissance and classical architecture.
Huttopia's Camping Indigo chain has a campsite in Colmar and it's a chain we trust implicitly. We thought nothing of booking for three nights. 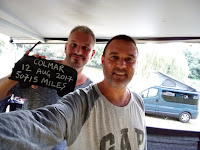 Wikipedia will tell you Colmar is one of the driest cities in France, but when we arrived the site was wet and muddy. We pitched as best as we could so we weren't sitting outside in a wet bog. Our pitch had a view of the river L'ill.

We were midway between two facility blocks, one of which was clean and new and the other dated and grimy.

The site is two kilometres from the historic city centre of Colmar and suffers road noise and sound from the nearby industrial areas.

I have to say after visiting about 14 Huttopia and Indigo campsites this one rates as the worst. I'm wondering if they're aware of that because they haven't put their name to it anywhere. From the road there's a garish sign that doesn't fit with their branding or mention the camping Indigo name. Only a couple of signs on the reception and bar use their trademark colours and font, and the Huttopia brochure is available in reception. Aside from that it doesn't look and feel like the usual Huttopia experience. 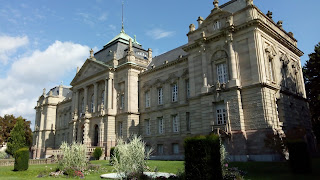 Colmar itself didn't live up to expectations either. We decided to walk into the town on our first afternoon. The walk from the campsite isn't pretty. Colmar has a beautiful old town at its centre but has become a sprawling city outside of this with industrial areas and busy dual-carriageway roads. Nice as the old town is, it's streets are chock full of camera-wielding tourists.

After spending a couple of hours in the old town we'd seen it all, leaving not much to see and do for the next two days.

We had a leisurely first morning, cooking up a breakfast of sausages, eggs and homemade baked beans. We eventually left camp at 11am and decided to take our bikes. We wanted to call into Decathlon for a spare set of tent poles for our tarpaulin and it was just far enough out of town that we didn't want to walk.

After Decathlon we decided to have another stroll around the old town to see if there was anything we'd missed and maybe find a nice bar for a beer or two. We locked our bikes next to dozens of others outside the tourist information office. 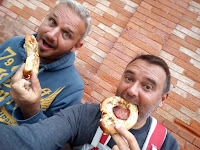 We enjoyed pretzels topped with cheese and chorizo from the covered market and found a pub for an expensive beer before deciding we'd seen all there was to see and that we'd cycle out of town towards the forest and vineyards.

This plan was put on hold when we arrived back at the tourist office and Tony's bike was gone. Our bike lock, Decathlon's cheapest, had been cut and one of our bikes stolen.

The remainder of the afternoon was spent walking back to Decathlon to buy Tony a new bike and two better locks. As it turned out I had bike envy and treated myself to the same bike Tony bought to replace the one the bike thief didn't think was worth taking.

A miserable situation was made better by both of us having brand-spanking-new bikes. Decathlon is a massive chain and I guess their economies of scale allow them to offer a great quality bike you wouldn't expect to find for the money anywhere else.

We got to put our bikes to good use the next day which was proclaimed a get-out-of-Colmar day. We skipped breakfast and set out towards the east side of town and then out into the countryside.

Wintzenheim was the first town we passed. We bought custard-filled pastries and orange juice from the supermarket, sitting on a bench at the side of the road to enjoy the breakfast we'd skipped. 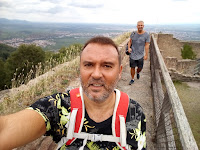 Finding a suitable location to trust leaving our new bikes with their new locks, in a town square, we set off on foot to visit Hohlandsbourg castle. The castle sits upon a mountain summit and we had an hour's walk uphill through woods. It was hard going but the views from the top were worth it.

Tony wanted to go inside the castle and, at 14€ for the two of us, I wasn't keen, but I went along with it. You can walk right around the top perimeter wall - the highlight for me since it affords spectacular views of the neighbouring mountains and wine regions, and several other castles peeping out along the way. 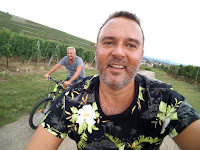 Eventually I dragged Tony out of the exhibition rooms, reminding him it was supposed to be a day of cycling through vineyards.

Back on our bikes, we used Google Maps to guide us to the next village and stumbled upon the official Alsace wine route, a well-signposted 170km cycleway through vineyards and wine-producing villages. What a revelation. 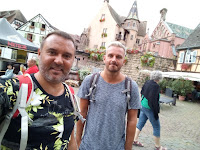 Our next stop was the stunning little town of Eguisheim, ranked as one of the Most Beautiful Villages of France since 2003. It's a fortified town with concentric narrow cobbled streets filled with colourfully-painted, half-timbered houses all lovingly adorned in displays of flowers. Restaurant diners spill out into the streets and quirky shops overflow with their wares. There was a gift shop dedicated to mushrooms, including walking sticks with red painted mushrooms on the tops, and a shop specialising in models of witches. 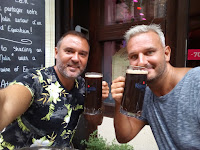 We enjoyed a locally-produced dark beer in the Bar St Leon. It was malty, slightly sweet and a little fizzy - delicious and two Euros cheaper than you'd pay in Colmar.

We'd discover later that Eguisheim has a campsite of its own and I'd advise anyone to choose to stay here, rather than Colmar. It's an hour's cycle ride along the wine route or by the river L'ill to Colmar should you want to visit for the day, and you'll be properly camping in the beautiful countryside rather than in an industrial zone. If you're hell bent on it being a city break then go to Strasbourg instead.

Now we've discovered the Alsace wine route I'd love to come back and cycle more of it.