The beautiful Yorkshire Dales was our Bank Holiday weekend destination, far further north than we'd usually venture, and we booked in at Catgill Campsite, found through Cool Camping.

We arrived at 1.30pm on Friday and grabbed one of the last level pieces of ground. The site continued to fill up with campers and around half of the tents and campervans had to pitch on sloping ground or squeeze in ever more closely to other camping units. We perched ourselves on top of a hill with space for another unit either side of us. Our two neighbours arrived before sundown and it felt cosy but not uncomfortable.

The campsite has stunning views and great facilities and on a less busy weekend could probably be recommended. On August bank holiday though, it was overfull. Just four showers in the men's block was woefully inadequate for that many campers and we opted to get up at 7am rather than queue for ages later. This image shows the state of the refuse bins by Monday morning.

On our two full days we cycled to Skipton on Saturday, and walked around the grounds of Bolton Abbey on Sunday.

While we were out on Saturday a large family with two tents, a car and a white van, emblazoned with the name of a scaffolding company from Leeds, moved from wherever they had pitched the previous night and wedged themselves in in the small space between us and the next tent. They were literally a foot away from us and the other tent. The saving grace for us was that their tent doors were facing away from us. For the young couple in the tent the other side it was far worse as they had a large, noisy family with kids, who were awake at 7am, sitting a metre from where they were sleeping. After two nights we were in no doubt that one of the kids' names was Jo pronounced Jurr as in 'Jurr nurr' (Jo no), which was repeated in rounds of three about every two minutes.

This party weren't the only inconsiderate campers either as music was blasting out from three other pitches over the course of the weekend, and the site was rammed with kids being allowed to run and cycle all over the place, or throw toy cars at each other up and down the hill.

I've never experienced a campsite like it and I don't know whether it was the busyness of the Bank Holiday weekend or whether all northern campers think this is how to behave on a campsite. 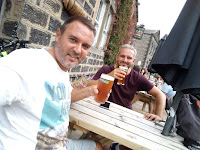 We managed to enjoy our weekend regardless, taking ourselves off on our bikes or on foot to explore the countryside. We discovered lovely pubs in Skipton, the Cock and Bottle which has a beautiful courtyard, and in Addingham - the Crown where a pint was just £3.30. We weren't so impressed with the nearest pub to the campsite, The Devonshire where it was £4 a pint and mine tasted like vinegar.

A final piece of advice if you're still brave enough to stay at Catgill Campsite is not to rely on the nearest shop calling itself Bolton Abbey Village Shop. I'd expect a village shop to sell basic stuff like bread and milk, but you'll be out of luck unless your shopping list comprises cuddly toy emus and overpriced lemon curd. This is a gift shop and not a village shop. You'll need to visit the Co-op in Addingham or large branches of Tesco and Morrisons in Skipton for your grocery requirements.