Cycling and hiking around Lake Como

We found the northern end of Lake Como, where we camped four five nights, to be pretty good for cyclists and hikers alike.

We were based in Sorico and cycling to the east and anti-clockwise around the lake was enjoyable, with the terrain mostly flat and cycle lane almost all the way. The only times we had to use a busy road was across bridges.

Heading anti-clockwise from Sorico we found a quiet stretch of beach with two small coves where we were completely alone. You'll cross two rivers flowing into the lake, following cycleway parallel to the second river into some woods, where just before Colico Piano there's a small path to the lake edge and the larger stretch of beach. Lock up your bikes and walk to the right and you'll find two smaller and coves just across a grass clearing. We spent a quiet afternoon laying on the beach here with an occasional dip in the lake to cool off. 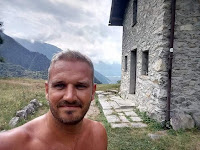 If you're feeling particularly energetic then I cannot recommend highly enough cycling north of Lake Como, skirting around Lake Mezzola and continuing to Mezzolpiano where you'll need to lock up your bikes in the car park for a two-hour hike to the remote village of Codera. We had a cloudy day which seemed the ideal opportunity to attempt the walk.
Passing Lake Mezolla, we spotted an area on the north shore being used to wild camp right next to the pebble beach.

Mezzolpiano was an uphill cycle and so we were exhausted even by the time we'd reached the car park. A sign proclaimed Codera to be a two hour walk and so we set off. The path is cut into the rock and is mainly steps, up hill to 800 metres. Even with the cloud cover it was still a warm day and sweat was pouring of us as the accent seemed endless. We had a litre of water each and I was trying to ration myself so that it lasted the two hour journey. I think the altitude, intense exercise and thirst all combined to make me feel light headed.

Half way to Codera the path levels out as you reach the same altitude as the town which you'll be able to see ahead of you. Also there's a drinking water tap and we gratefully refilled our bottles with cold water, gulped it down and filled them again. I'd have coped with the climb much better if I'd known I need not have been so sparing with my water supply.

Just before reaching the pretty village we passed a heli-pad. There are no roads to Codera and therefore supplies can only reach the village by foot or by helicopter. There's a refuge as you enter the village and we stopped for a cup of coffee. They serve food and have rooms for walkers to stay overnight.

Rain was forecast for 5pm and we didn't really want to do the return walk in the wet and so we didn't stay long in Codera. We spotted a museum and art gallery there and so there'd be a few things to do and see if you wanted to give your weary legs a rest a while longer. 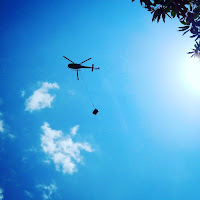 The return journey is less strenuous and we were delighted when we could hear a helicopter overhead and witnessed for ourselves the village's supplies being flown in, dangling on a rope underneath.

Although we had terrific 12-hour thunderstorms overnight only one of our days was rainy. We decided to explore on foot and visit the little white church we could see up in the hills from Camping La Riva. 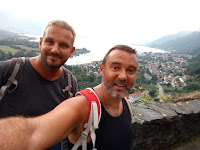 Just before Sorico a path leads up to a stone church. Just past the church the path forks and we followed it to Dolo and then to Cerceno beyond that, taking in the stunning views back down to Lake Como below us. A well marked path then leads down again to Gera Lario on the shore, and from there it rained. It rained like I've never seen it before, certainly not while being out in it.

We donned our Decathlon ponchos which went some way to keeping us dry. We became worried about the mobile phones on our trouser pockets as our shorts became more and more soaked by the rain. Tucking them in the wristbands was all we could do to keep them dry.

A valuable lesson for us is to carry a dry bag in our rucksacks for locations such as this. It took the sunny evening and overnight for our rucksacks and their contents to dry out.

The weather was changeable to say the least. The thunder reverberates around the mountains to appear almost constant. I don't think I've heard a thunderstorm last more than a couple of hours but here one continued long after we'd gone to bed right up until it was time to get up again.

I'm pleased to say that the promised rain on our last night failed to materialise and we were able to pack up the last of our belongings in the dry, before winding our way up into the mountains, crossing into Switzerland and then into France where we have three more nights of holiday left.