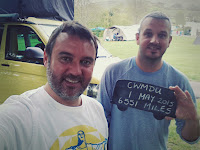 This is where we've wanted to take our campervan ever since we've had her. Cwmdu campsite in the Welsh Black Mountains is a site we have visited in a tent many times before and we like it for its back-to-basics simplicity.

It's a smallish campsite on a gentle slope with basic facilities and a shop/reception that's open for one hour each morning and evening.

Cwmdu is a tiny village in a valley and so the campsite also benefits from stunning views in all directions and hundreds of walking and cycling possibilities.

This is our first visit in Cleopatra because the site only just opened for the season. May Day bank holiday seemed the ideal time for us to venture so far for just a weekend.

We arrived at 7.30pm and the site owners told us we had a pitch at the top of the hill with the best views. We wanted to be near the bottom where we had always pitched the many tents we've owned in our time. Fortunately this was no problem and we were quickly parked in our chosen spot under trees and next to a Mazda Bongo conversion.

Beers in hand, we put off cooking dinner for an hour or two, sitting outside soaking up the view. Wales has some of the best views in the world as far as I'm concerned, though it doesn't always have the weather.

Eventually we cooked steaks on a tiny barbecue I'd purchased during the preceding week. We used sticks rather than charcoal - I'm much happier using something that's freely available rather than paying for, and having to carry around expensive, bulky and dirty charcoal. It worked a treat and very soon we were carving up smoky beef steaks to enjoy along with crunchy salad in our fajitas.

We started to nod off around 10pm as we always seem to do when we're camping. I put it down to the total relaxation you get when there's nothing to do but sit and admire the view in total peace and tranquillity.

Next morning we made coffee and showered before unlocking our bikes from the tree we'd locked them to and cycling the two minutes to Cwmdu cafe where we both ordered the biggest breakfast on the menu.

The large Welsh full-English breakfast consumed we set out for our day's bike ride proper. The plan was to use minor roads to reach the Monmouthshire and Brecon canal and then enjoy a gentle cycle along the towpath, stopping in every pub we came to.

We only discovered the existence of the canal last year. It's only about 4 miles from Cwmdu and how we had never found it before that I have no idea - it's probably because it's halfway up in the hills where you wouldn't expect to find a canal. But I'm glad we now know about it, because it makes a lovely walk.

The canal passes through farmland and boasts mountain views eitherside. Every once in a while you pass under a little bridge, each one numbered into the hundreds. You share your walk with the very occasional fellow walker. The odd narrow boat chuggs past too. It's Wales' best kept secret as far as I'm concerned.

Of course the fact the canal passes a country pub every so often is also a nice perk! We cycled all the way to Talybont-on-Usk which has no less than two pubs, and had a pint in the White Hart.

The Star Inn would have taken our cash had it opened at the advertised time, but I asked someone who had come out to retrieve something from an outhouse five minutes after it should have opened, who said it would be another 15 minutes. We went to the pub a minute's walk away where we had a warm welcome and the choice of half a dozen real ales.

After a long and tiring ride back to camp we both snoozed for a couple of hours before deciding perhaps it was time for a few more beers. We used our wood gas stove to start a tomato and vegetable sauce we would add meatballs to for dinner.

We woke late on Sunday and the sun was already making the van's upper bedroom warm. We had cereals and coffee in the van and showered at leisure until it was 11.30am before we formulated the day's plan. We decided on a short walk before going to Cwmdu's Farmers Arms for a drink.

We've never stopped to look at the map on the roadside in the village until now but doing so opened up a new world of possibilities for walks. So we decide on a slightly longer walk than originally planned and set off to Tretower, the next nearest village.

It was a beautiful walk and the sun even came out, leading me to take off my coat and tie it around my waist.

We approached the Tretower tower through a field and snapped a few pictures thinking we would see it closer up once in the village. A £4.75 entry fee said otherwise (I don't enjoy castles enough to pay much for the privilege at the best of times, but there's hardly anything left of this one to justify charging entry).

We chose a different route back to Cwmdu, this time scaling the mountain to the back of the campsite and walking along at altitude enjoying the view back over the fields we'd crossed in the other direction.

We walked through the doors of the Farmer's Arms just before two. I thought we'd have a pint or three and ordered the first, taking it out into the beer garden. We hadn't been seated for a couple of minutes before we both agreed resisting the carvery we had just seen, and smelled, was futile and went back into the pub to ask if we could eat.


Money was no worry here. The Sunday carvery was £9.95 and it was just £2 to add a first course or dessert. It was a no-brainer - we had three amazing courses, all of such generous proportions it felt like we had just eaten Christmas dinner.

We both ordered the rich and creamy duck and orange pâté for starters. There were two chunks of pâté each and eight triangles of toast. Then Tony opted for roast pork and I for roast beef. The meat was carved and plated for us and we both were given twice as much as I'd have expected. There was an individual Yorkshire pudding and stuffing and we helped ourselves to roast potatoes, cauliflower and white sauce, carrots, peas and gravy. Finally Tony ordered an ice cream sundae, having seen one be delivered to another table of diners. I had the chocolate lumpy bumpy.

We slept our dinner off until late afternoon when the sun had come out and then we sat outside until dark watching the world go by. Two little robins hopped from branch to branch in front of us for ages until they dared venture into the undergrowth.

We fried two venison steaks for dinner at around 8.30pm and enjoyed them with salad and quinoa, washed down with a few glasses of wine.

We awoke to a sporadically sunny morning despite looming black clouds and drank our coffees between packing ourselves away for the journey home. I'm trying to forget about what was preventing the awning from rolling back into its housing - a dead pigeon had fallen out of the tree in the night!