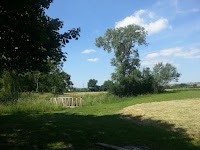 I painted a very rosy picture of our campsite Domains Les Gandins yesterday. It's only got better and better. So much so in fact that I've pleaded and pleaded with Tony to let us stay longer. I'm pleased to say he finally gave in and we'll depart on Saturday and not Friday as originally planned. 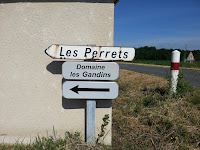 It's been gloriously sunny and yesterday we did nothing except lay in the sun and drink beer, have a swim in the pool, and play a little bit of table tennis (we've been carrying around table tennis bats and balls since a visit to Decathlon a month ago).

We've been finding time to fit in three meals a day though. On our first evening we made rabbit sifado, after getting over the shock that a whole rabbit in its entirety was in the tray purchased from Lidl.

The rabbit cooked slowly with shallots, tomatoes, cinnamon and dill for five hours until it was every bit as good as we've had in a Greek restaurant.

For breakfast yesterday we made cassoulet, and then for lunch salami and cucumber sandwiches. For dinner we made chilli con carne. 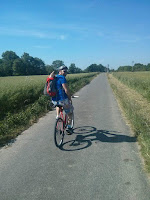 Today we decided to cycle to the next village where we knew there to be a bakery. As soon as I set foot inside I wanted everything. We easily filled our backpack with a large loaf of bread, two pan au chocolat, a gooseberry tart, jam filled biscuit and a large cheesy pizza type thing encrusted with blue cheese. The haul cost less than €10. 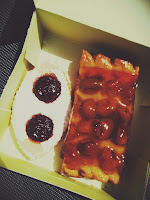 We were back at the campsite within the hour and ate the pizza type thing as breakfast. A couple of hours later I came up with the suggestion of cooking the mushrooms from our cool box in garlic and butter and having them on slices of the loaf. It was divine and a great excuse to have a glass or two of wine.

Dinner is yet to be decided, but may include chorizo infused sausages. Who can say?

This afternoon I went wild swimming in the river that runs along the back of the Domaine les Gandins estate. When I say I went swimming I mean that I went in the water long enough for Tony to snap photographic 'evidence' that I'd done this.

Actually it wasn't all that cold and I wish I'd stayed in for a bloody good swim. 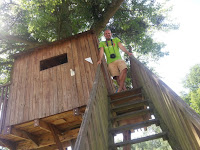 We mooched around the estate taking pictures. It's an amazing place. We're enjoying it as an away-from-it-all couples' retreat but it would be fantastic for children with its tree house, row of go-karts ready to be ridden, swimming pool, trampoline, acres of green fields and chickens and rabbits.

This afternoon two people have arrived and are pitching a tent as I blog. There's another two hours of sun to enjoy too, knowing that tomorrow I'm not going anywhere (except maybe back to the bakery).