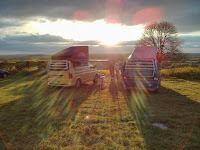 We spent a very blustery weekend at Town Farm campsite in Ivinghoe last week. It was our second time on the site and this time we opted for a grass pitch without electric.

The site enjoys stunning views over the Chilterns but the best views are from the perimeter of the site where there's no electric.

This would have been all well and good had I not forgotten to pack one of the several bags of dry sticks we have at home! For off-grid cooking we use the brilliant Solo Stove Titan which needs only twigs and sticks to produce enough heat to cook. It had been raining and so the only sticks were were able to find were a little damp.

It took some time to get the stove going but once well lit it functioned well with the fuel we were able to burn. A small amount of moisture in a twig is no match for a flaming inferno!

We cooked salmon fillets and ate them with a lentil and quinoa salad, washed down with wine.

On Saturday we were up early and packed back up to drive to the National Trust Estate at Ashridge to meet up with one of my work colleagues for coffee at the café there. We arrived half an hour early and both gobbled down a large full English breakfast beforehand.

Our new-campervan-owning friends joined us in the afternoon and we enjoyed a relaxing evening of chatting, cooking and admiring views. After dinner we played a four-player game of my all-time favourite boardgame Ticket to Ride. I fell asleep just before scoring and had to wait until the morning to discover one of the first-time players had won!

Sunday morning involved a leisurely breakfast before we drove to Aldbury, unloaded four bikes from two vans and cycled to the café at the Ashridge Estate having admired the range of cakes the day before! The queue was enormous so instead we decided to try getting Sunday lunch at the pub in Aldbury.

Sunday lunch acquired and consumed we spent a lazy hour with our picnic rugs by the village pond. Not wishing for the weekend to end we decided to try our luck back at the Ashridge Estate's café. There was still a long queue but as luck would have it they were also selling hotdogs from a stand-alone grill and we devoured some of these while waiting to buy cakes.

It was pointed out to me exactly how greedy I looked pointing and admiring cakes being taken to tables by those in front of us in the queue while I had a hotdog shoved halfway in my mouth - priceless!