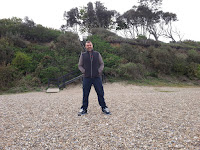 This weekend we stumbled upon the camping world's best kept secret. The campsite we stayed at is so well located, with steps down to miles of unspoiled Suffolk beach and just out of the way enough to be peaceful and quiet. It's so nice I don't think I want to tell you where it is.

We were pitched by 6.30pm and enjoyed a few beers on a very mild evening, watching the sun go down through the trees. We moved indoors to cook a dinner of smokey sausages and paella rice, falling into our beds in a food and wine coma around 10pm.

We woke up just before 9am and made coffee before showering in the brand-new shower block with underfloor heating. You don't often leave a campsite shower feeling 100 percent clean but here I did.

I put on shorts for our planned walk and by 9.45am we were on the beach heading towards Southwold.

The walk took almost two and a half hours and it was hard-going along the pebble beach. Eventually we joined one of several footpaths that cross the Dunwich Heath. It's a dramatic landscape and so, so quiet. We passed less than ten other people in two hours.

Before Southwold it is necessary to cross the River Blyth. You can only do this on the unique Walberswick Ferry. Unique because it's a rowing boat. It's £1 per person to be taken across to the other side. The river is flowing so fast out to sea that the ferry man (and later a woman) had to paddle us some way upstream before attempting to make progress towards the opposite bank.

Another ten minutes of walking saw us arrive in Southwold. What a beautiful seaside village. Once again it felt quiet and we mooched around the high street, stopping to visit the Adnams brewery shop and cafe.

I'm rather partial to Adnams Broadside ale, and to their lighter summer ale Ghost Ship. In their shop you can also find their own artisan spirits and I sampled their gin which tasted amazing - it would be dreadful to even contemplate putting tonic in it.

On the way back towards the sea I purchased a stainless steel caffettiere from a hardware store. We've tried many ways to make good coffee in the campervan, including coffee bags and one-cup filters. But as I like a good quality coffee first thing in the morning nothing had lived up to expectations and the first thing we'd track down each day would be a coffee shop. That's one expense we can now be without each weekend.

Southwold has a mysterious shortage of fish and chip shops and rather than order from the cafe on the pier we decided to wait until we were back at Walberswick. We both had haddock, chips and mushy peas from Mrs T's.

We were rowed back across the river for another £1 each and this time we followed footpath all the way back to Dunwich. We found two pubs on the way to satisfy our desire for Adnams ales.

We arrived back at the campsite seven and a half hours after we'd left. Our feet really knew that and I had a blister that nearly doubled the size of one of my little toes.

We sat out outside and enjoyed more beers with a day-old newspaper and then cooked Moroccan meatballs for dinner. As has become the standard camping evening we were in bed by 10pm.

Sunday morning coffee courtesy of the new caffettiere was strong and fulfilling! We packed up and were leaving the campsite just after 10am. By 10.30am we were parked in Southwold to go back to the Adnams brewery shop. Cleopatra just a stone's throw away meant we could now buy everything we'd had our eyes on the day before!