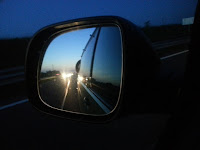 Our Eurotunnel crossing was booked for 8.50pm but we arrived at the Folkestone terminal at 6.07pm. We were offered a 6.50pm crossing and readily accepted. We had two and a half hours more to drive before our scheduled overnight stop and we were glad of the extra sleep these two hours would allow. 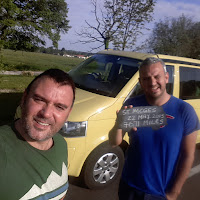 The Aire at St Imoges was great. There were four other motorhomes parked for the night and we joined them. The forecast was for a dry night and so we popped the roof up and didn't bother fastening on our CaliTopper, the military-grade fabric cover we bought to keep the integral roof fabric pristine. 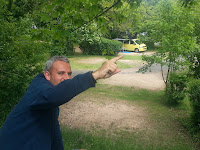 We went straight to bed and were up and on the road by 8.30am. The Sat Nav gave a time of arrival at our first campsite of our week's holiday as 2pm. It was dead on within ten minutes.

Our first three nights in France were in Royat at Camping Indigo Royat. We checked in quickly and were told to choose any pitch we liked. We were also offered fresh bread for the morning and we asked for a baguette. 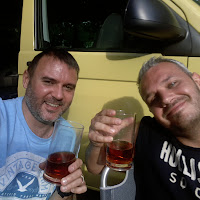 The campsite is spacious and the pitches are separated by trees and bushes so it feels relatively private.  It's a site I'd happily recommend or come back to.

We spent an hour sitting outside in the warm afternoon sun, reading newspapers and drinking beer. Then we decided to have a little explore. 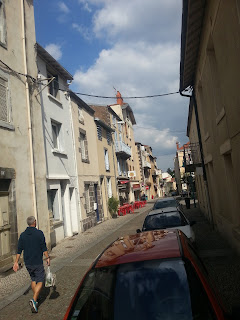 We walked in to Royat where shops were still open. We bought beef liver for that night's evening meal and turkey breasts for the following night.

We didn't really need fresh food as we'd packed in case we couldn't find an open shop, with tins of ham, meatballs and fish. But fresh food is preferable and the tins could continue their journey in Cleopatra until we needed them.

On Sunday morning we enjoyed our fresh baguette sliced with butter. We also enjoyed proper coffee from our new cafetiere. 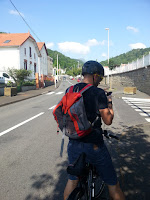 Showered and dressed we unlocked our bikes from under the tree we'd tethered them to and set off towards Puy de Dome, the highest of the chain of volcanic mountains in the region. 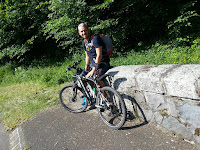 Google Maps suggested it would be an hour's cycle or two hours walk. We did a combination of the two as it was uphill all the way. A quarter of the way there Tony was ready to give up, cycle back downhill and bring the campervan instead but I convinced him to press on.

It was tempting to take the train up to the summit of Puy de Dome, but it would have felt like I'd cheated and so we locked the bikes to a sign post at the car park at the base and began what turned out to be a very grueling walk to the top. 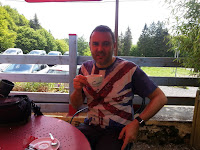 On the way up we passed many, many people coming the other way. The sensible way to see the views is to get the train up and walk back down. I kept telling myself that at least I was walking off the ice cream I was going to have at the top! 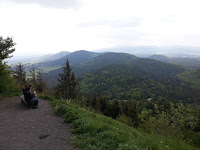 When we finally arrived we bought a very expensive beer each and, after taking copious photos of the views, bought ourselves train tickets back to the bottom. 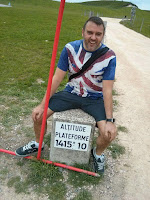 Our bike ride back to Royat took just 15 minutes and we didn't need to pedal once. I might need new brake pads on my bike though.

We cooked turkey tikka curry for dinner and enjoyed it outside in the warm evening air. 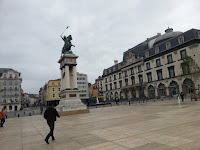 Monday was set aside for exploring Clermont Ferrand. It was like the opposite of the previous day - it was a gentle downhill walk all the way to the centre of the city. We walked through a lovely park and gasped at how the newer architecture jarred horribly with the old.

All in all I thought it was a lovely city, when large European cities aren't really my thing.

The walk back to our leafy suburb of the city was excruciatingly tiring. We walked up and up until I felt quite faint. We made it though and I rewarded myself with a Toffee Crisp.

Dinner was macaroni cheese, and sleep followed soon after.