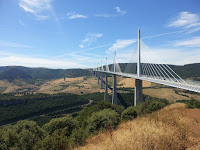 I knew immediately upon arriving in Millau that our three nights here wasn't going to be nearly enough.

We detoured on our approach in order to drive across the Millau Viaduct, the world's tallest bridge. While impressive enough from the drive across, it wasn't until the following day that we'd fully appreciate this feat of engineering when we cycled underneath it.

We stopped at the viewing area for photos before changing course for our campsite destination Camping Indigo Millau. 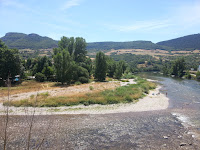 Two rivers meet in Millau, the Tarn and the Dourbie. Our campsite was in the right-angle corner where they meet and boasts a long pebble beach on the bank of the Dourbie whose clear waters flow swiftly past.

Our first afternoon was spent on this beach, in the sun, and swimming alongside several families and dozens of children floating past on rubber rings. There were many kayaks going past too which inspired us to hire one the next day. 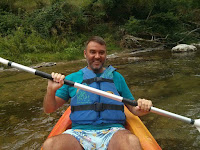 Our first full day in Millau was exhausting as we paddled 12km along the Dourbie and then cycled 30km in the afternoon. Our two-man kayak was booked for 10am and it started by our being picked up in a dusty jeep without seatbelts for the journey upstream.

Our belongings had been safely stowed in a plastic barrel to keep them dry. This was handed to the driver who strapped it onto one of the kayaks being towed behind us. I spent the whole drive looking in the rear view mirror checking it hadn't fallen into the road with our phones and wallets inside! 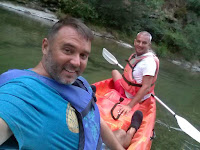 We were dropped off on the bank of the Dourbie and could take as much time as we wished paddling back to Millau through the Dourbie Gorge. You could just float your way back as the river flows very fast.

The waters are crystal clear and we spotted huge fish and even a couple of bright-red lobsters. 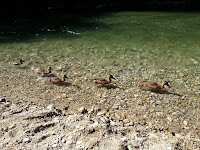 Our major exertion was in negotiating the kayak through rocks, stones and shallow parts. It wasn't quite white water rafting but it was a good first introduction and rather exhilarating in places. We grounded occasionally, alternating between trying to get free by shuffling inside our seats to getting out and lifting the kayak free of its obstruction.

I was soaking wet as Tony became so focussed on paddling around obstructions that he kept splashing me with his oar.
Eventually we recognised the campsite before our own and were back in familiar territory. We lifted the kayak out onto the bank near the rental hut and our kayaking adventure was over. It's the most fun I've had all year! 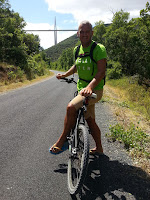 After a late lunch we decided to cycle to the Millau Viaduct. We'd exercised our upper bodies and now our legs took the strain of many a steep hill. As we finally approached the bridge we slowed to take in its beauty and the genius of engineering. It's only from below you fully appreciate the scale of the structure.

A good few photos taken, we continued cycling and came to a lovely little town built into the cliff face. We carried on in the hope of finding a bridge to cross over the river and visit it but we never did. 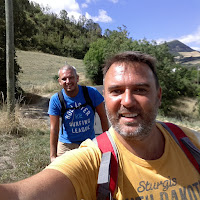 Our second and final full day was spent cycling along the Tarn Gorge. We cycled 21km until we came to the town of Le Rozier where we stopped, Tony bought a tarte au citron and we mooched around a small market before we'd built up the will to cycle the 21km back again via the opposite bank of the Tarn. The views throughout were stunning. I've never cycled anywhere as beautiful.

We spent the afternoon on the campsite's beach, making use of the rubber ring I purchased in Le Rozier in order that we could have just as much fun splashing around in the Dourbie as everyone else!
France