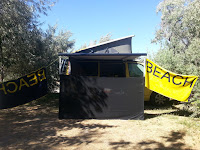 We'd planned to be waiting at the campsite‘s barrier at 7am, the allowed time to enter or exit the site, but we didn't wake until 7.15am. Then it would take another half an hour to pack up, fold down the roof and have Cleopatra ready for driving.

Still, we hadn't lost too much time and were still hopeful of journeying from our first holiday location on the west coast of France to our next scheduled four-night stay on the south coast by the time the campsite allowed arrivals at 2pm.

The French farmers had other ideas though. They had decided the best way to have the French government reconsider cutting their farming subsidies was to burn tyres on the only bridge exit from Oleron island. The carriageway was closed and we simply joined the queue of vehicles foolish as ourselves to believe they may get to their intended destination in any kind of good time that day.

The police, of course, did nothing to prevent the burning of tyres. Instead they posted someone at each side of the bridge to allow a few cars across in each direction each half an hour. It took three hours to finally be allowed to cross, during which time I contemplated many times just heading back to whence we had come and making the best of the day. 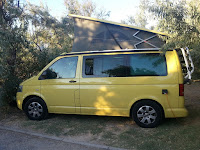 Once on the mainland our journey was a breeze. We stopped once for diesel and a wee and I took the opportunity to buy a fresh baguette which I crafted into pungent-cheese sandwiches as Tony continued the drive.

We arrived in Narbonne at 4pm and still needed to refill the van with beer -o h and food - for four days. Google said there was a Lidl five minutes away from our campsite and so we detoured slightly.

Now, Lidl may be inexpensive and options pretty basic, but one thing you're guaranteed is that the shops will be well presented and fairly easy to navigate. This is the Lidl that breaks that rule. Clearly it had, until very recently, been a local convenience shop. A plastic banner had been erected over the top of its previous fascia and only because it said Lidl did I believe it to be so.

Choice was even more limited and the aisles cramped and untidy. I did my best to assemble what I thought we could survive on for the next four days while Tony waited in the car park. 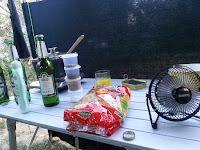 Cleopatra restocked with life's essentials we made the final short drive to Flower Camping Soliel where we were checked in and shown to our pitch within a few minutes.

The sun was blaring down and the heat was 32°C. A persistent wind helped take some of the heat off but it was unbearable to try to do anything inside the van for long and so we left Cleopatra in between the olive trees and went for our customary first-day explore. 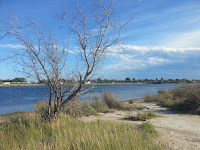 Narbonne plage, the town's beach is huge. There is flat sand as far as you can see in both directions and the beach is wide too. It was busier than we'd have preferred, but still each group of people had plenty of space. We walked for a while until clumps of people became fewer and found the place we'd come back to the next day, when the weather promised a day of uninterrupted sun.

We showered upon return to the campsite in an effort to feel less disgusting. Cleopatra and our large pitch was now in the shade of the olive trees and we broke open a few beers before cooking a simple dinner of pasta with sardines, lemon, garlic and chunks of fresh tomatoes. 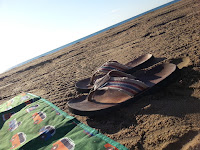 I'm pleased to report that sleep was easy. Since it's highly unlikely we'll see rain, we didn't put our military-grade fabric cover over the top of Cleopatra's pop-up roof. This had the benefit of letting the heat out and breeze in through the vents on each side. All night a gentle breeze swept across us and under just a sheet I was cool enough for sleep to be effortless.

I woke fully refreshed as the sun rose in the clear-blue sky. We made coffee and then packed our beach bags, grabbed the bikes and rode back to have first pick of beach location.
France