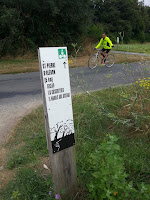 For beach-loving cyclists Ile d'oleron is absolute heaven. The whole island is bounded by sandy beaches, while the interior is crisscrossed by cycle paths.

We set off cycling on two mornings. On the first we cycled to Le Chateaux on the opposite coast. The island is so flat that it's a breeze to cycle and the well-signed cycle ways mean you always know where you're going while keeping you out of harm from traffic. 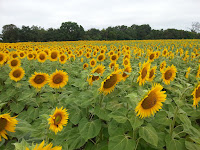 The paths go through pretty little villages, past farmland, open fields of wild flowers and, best of all on our approach to St Pierre on the second day, a sea of sunflowers so beautiful and striking I almost could have cried.

I've never seen a field of sunflowers. They were awesome. Waving gently on the breeze all facing the same direction, playing temporary landing pads to busy bees.
On both days we visited markets and on the first we purchased a crusty baguette and two oozing patties of goats cheese. We sat on a park bench in the square, split the bread with our hands and squeezed the pungent cheese between halves of loaf for an impromptu lunch. 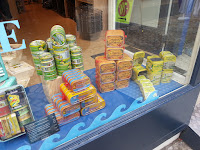 On the second day we were drawn to some delightful tins in a shop window. They were colorful and pretty and all contained some variety of sardines. Some with lemon, some with red pepper, some with olives, etc. It wasn't really the contents that caught our interest though and so we bought two yellow tins, each containing four smaller tins of sardines. They look perfect inside Cleopatra and will be useful for storage of something or other.

The contents won't go to waste. We ate the first tin of sardines and lemon on another crusty baguette with slices of tomato and cucumber. It was divine and I'm already imagining another tin with a few green olives and fresh herbs mixed with pasta spirals.

We've only allowed ourselves four nights here before our next campsite on the south coast of France and so reluctantly we'll be saying au revoir first thing in the morning.
But if there's one thing I know for sure it's that we'll be back very soon and for longer. In fact I'll be coming back until I've cycled every last inch of the island.