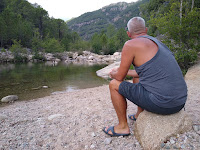 We've got wild swimming guides to three countries. They list outstanding places to swim that aren't widely known. They're always so out of the way we've never managed to get to one until today, and it was the whole reason for booking the campsite we're now on, Camping U Ponte Grossu, in the Corsican mountains.

After a 20-minute walk along the road we came to the bridge mentioned in the book and then followed the river bed upstream as instructed. This was no gentle stroll though, it was actual canyoning for which we weren't at all prepared. We had appropriate footware but with sections so deep we had to swim it was foolish to have rucksacks containing electronic devices.

We continued on and it probably took us three times the length of time we'd have done it if we'd have had waterproof holdalls like everyone else.

Finally we rounded a corner just feet away from the GPS coordinates given for an infinity pool. This would be the most difficult challenge. I scrambled up a precipice, leaving Tony with our bags. I managed to walk around to the opposite bank so Tony could pass me the bags on the end of a stick and then he was free to wade through a deep pool and climb up and join me. 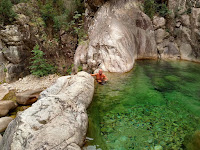 It was worth it. We were the only ones there and the rock pool was cool, deep and crystal clear. It was truly an infinity pool with a torrent of water spilling over into a cascading waterfall. We swam about, wallowing in the beauty of the place - a glistening green gem hidden between the monolithic towering sides of the gorge.

Thunder had us decide we should begin making our way back. We worried the impending storm might be the reason nobody else had come this far along the canyon.

I wrapped our phones, video camera and keys in a towel inside my rucksack to give extra protection if it were to rain heavily and we began to retrace our steps.

There continued to be occasional claps of thunder although rain failed to become anything more than a few heavy drops. We stopped to swim again in a deep pool about halfway back when I decided we should take more photos. I snapped pictures on my phone, filmed with my video camera and was just wrapping them back up when Tony's phone slid out from the towel tube. I watched, mortified, as it slid down the rock and into the water. It sank to probably the deepest corner of the rock pool.

We'd actually planned on some sort of mobile phone accident and packed an old one of mine 'just in case.' However with the phone being lost at the bottom of a deep pool, Tony will be without a SIM card until we get home.