France does it again 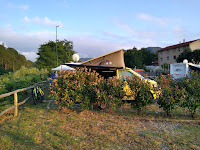 As always seems to happen when we leave a campsite, particularly one that hasn't lived up to expectations, we immediately drive past wild campers. Yesterday was no exception to this rule and literally within a couple of minutes we were passing campervans parked on Lake Annecy's shoreline, so close they could open their leisure doors and dangle their feet in the water. We striked it up as yet another lesson learned.

We had a four-hour drive ahead of us and, before our sat nav cajoled us back on to never-ending motorways we stopped for food and fuel at a Leader Price supermarket.

A baguette and cheese was on my shopping list while Tony filled the tank with gasole. I located the cheese pretty quickly and was on my second trip around the shop looking for the bread when Tony found me.

'There's no bread,' I announced. 'Probably because there's a bakery next door.'

I packed Tony off with a five euro note to buy a baguette while I queued to pay for my wedge of brie, a bag of crisps, some onions and tomatoes.

'The bakery's not open,' said Tony when I emerged clutching the groceries.

France has done it again. No matter how many times you visit and think you know the system, it'll always get the better of you in a way you won't expect. We're familiar with huge supermarkets that don't sell a single bread product when a bakery is next door. I guess that makes sense in allowing bakeries to exist and prosper as large food emporiums open up nearby. What makes no sense is that we now can't buy bread at all because the bakery, that's been saved because the supermarket isn't allowed to compete with it, is closed.

I threw the brie in the cool box and climbed in the passenger seat as we let Google navigate us towards Italy.

Another lesson still not learned is that sometimes when your route crosses from France into Italy it'll be via the Frejus Tunnel. This was one such time. Had we looked ahead in time we might have taken the one-hour detour to avoid it. It's sixty euros one way. A return costing only ten euros more is only valid for seven days. Still, at least on this occasion we actually wanted to go to Italy (on our first brush with the Frejus Tunnel we were in France and our destination was another part of France but, to our complete surprise, we drove through a long and expensive tunnel through the alps to emerge in a country we didn't need to be in).

The Italian motorways were a little bit more difficult because we had to keep stopping at the tolls and no two tolls seem to work the same. For the first few I inserted my debit card for a set amount, which seemed to be for the stretch of road ahead. Things were complicated at another such toll booth when I inserted my card as I had previously only for it to be returned and the barrier to remain firmly shut. I inserted it again and still nothing happened. To make matters worse each time I fed my card into the machine I could hear my phone notifying me of the transaction. I'm being charged every time I put my card in,' I told Tony in frustration.

Tony handed me coins and I dropped them into the chute. The light went green and the barrier opened.

When I picked up my phone I found that I hadn't been charged at all. The notifications were to tell me the transactions were being declined because I had the setting to use the magnetic stripe turned off.

I was ready the next time we approached a toll. I had my phone unlocked, fingerprint read by my banking app and the switch for allowing magnetic stripe transactions enabled. This toll was different again, spewing out a ticket for us to reinsert further along the motorway. In contrast to all this confusion, when we're driving through France, our electronic tag stuck behind the rearview mirror just beeps as we approach the toll barrier and we pass through without even stopping. Instead we just wait apprehensively for the bill at the end of the month.

Finally we drove off the motorway and onto quieter roads. There was still half an hour ahead of us as the road became narrow and winding as it led us up into the mountains. I'd set a motorhome aire into the sat nav but not really explained anything about it to Tony. I began to worry as our path became ever more remote.

With five minutes drive left according to Google we reached civilisation: the town of Pontinvrea. Our narrow road spilled out onto a proper two-lane affair and imposing buildings soon surrounded us. A left turn, after a street market which was now packing up, led us past a football pitch and around to the aire which was filled with motorhomes. Tony maneuvered Cleopatra into one of two remaining pitches.

I was pleased to see the aire had toilets and showers and headed off for a comfort break. I noted that the owners of most of the other vans, all with Italian plates, seemed to know each other and were sat in a large circle talking, laughing and joking loudly. I began to worry this might go on until late spoiling any hopes we'd had of an early night.

Two motorhomes departed with the group saying their goodbyes along with copious air kisses. The group didn't seem to diminish at all however.

As early evening drew around each member of the group went off to shower. Each shower was brief - they each only took in one bottle - and they would emerge wearing a blue bathrobe. Every one of them. I began to wonder if blue bathrobes were obligatory in Italy, or whether perhaps they were all sharing the same one.

A little later, to put our minds at rest (not about the bathrobes) I approached the circle of friends with my phone displaying what Google said was the Italian translation of 'Does the gate get closed at night.'

The lady I showed my phone to read the question aloud to the rest of the group and I was soon party to a round of 'non' and much shaking of heads.

We spent the afternoon walking from one end of Pontinvrea to the other, investigating the pebbly river to see if there were places deep enough to swim. There weren't but I had a good paddle.

We sat in the evening sun until we judged it cool enough to shower and not get sweaty all over again. We'd already determined not to plow coins into the machine for hot water but, even if we'd wanted to, we couldn't have done so since it turned out the hot water was obtained through tokens available at the now closed outdoor swimming pool next door.

I'm not sure what the Italians made of us when we emerged from the showers not ensconced in fluffy blue bathrobes, but in black toweling tunics.