Fine we will pay a fine 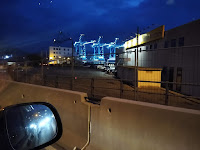 As night drew in on our Italian motorhome aire it didn't get particularly dark. The light from several lampposts was blinding through the pop-top roof windows which we wanted open to allow the breeze to blow across us. Fortunately I had found my eye mask earlier in the day and, with the Italian campers who'd been pretty loud all afternoon having also retired to bed, I slept soundly until our 4.30am alarm.

The road down from our mountain base for the night was winding but newly paved and smooth. It was beginning to get light when we approached Savona ferry terminal.

We put our bikes inside the van for our ferry crossing with Corsica Ferries after the shock of getting a 70€ fine for having them on the bike rack last year. We still didn't win though. A man, looking really pleased with himself and his measuring stick, called me out of the van, showed me the height recorded on our ticket and demonstrated that we were ten centimetres taller. I say 'demonstrated' but since there were no measurements marked on his metal pole I had no option but to concede to his superior knowledge and trot off to the office and pay another fine, this time 40€.

The plus side is that our lane of vehicles boarded the Sardinia Regina before six lanes of cars. Last year we learned you have to be quick to nab a deck chair on the sun deck and we were among the first to be able to do so on this occasion. I enjoyed immensely watching the car drivers arrive on deck to find all the seats taken. A five and three quarter hour ferry crossing doesn't seem to drag at all when you can sit outside and sunbathe!