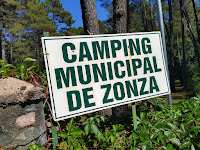 We'd spent five nights on the beach and two by mountain rivers and wanted to see a bit of Corsica on foot and so we left Camping U Ponte Grossu at 8am on the second morning, continuing inland westwards to Zonza.

Our first priority was finding a cash point as the 31€ per night rate of the previous campsite had wiped out our currency. We stopped in Zonza itself at something describing itself as Banque Postale. No ATM was apparent outside so I entered and asked one of two staff if I could withdraw money. They replied with the name of the next town south.

It was only an eight-minute drive to the next town and it did indeed have an ATM. We headed back towards Zonza and then
five minutes eastwards towards a municipal campsite. It was ten minutes to ten in the morning and a sign informed us reception was open from 8am to 10am daily.

We booked in. It would be 16€ per night including electricity, half the price of our previous campsite. We were free to find ourselves a pitch. 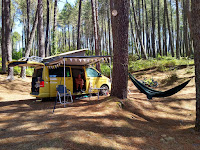 The site was spread throughout a terraced plot under the shade of pine trees. It was about a third full and so there were plenty of pitches to choose from. We wanted somewhere that enabled us to hang our hammocks. A great pitch was currently being vacated by a couple with a tent and motorbike and so we parked on the next pitch and waited. It soon became clear their packing up would take a while and I really don't know how their belongings continued to disappear into such a small amount of storage. With still their breakfast things and a washing line full of clothes to be packed away we made ourselves our own breakfast, washed the dishes, applied sunscreen and downloaded maps. When they finally left we quickly took their place.

We decided to make the rest of the day a research mission. We would walk into Zonza obtain maps and locate the footpath we hoped to hike the following day.

It was a 45-minute walk along the flat road into Zonza. The tourist office didn't have the map we wanted to take away - we could only take a photo of it. We might have well taken a photo of the one in the campsite reception and saved ourselves a wasted trip. Similarly we were unable to locate the promised footpath sign and it looked as though Zonza was not going to offer is the walking opportunities we'd hoped.

The town's small Spar supermarket was open though and so we bought a few bits for use in the evening's dinner.

Later on, using the French word randonee instead of the English 'hiking' I found a website from where I could download a PDF with a detailed map and good set of (French) instructions.

It dropped to 11°C in the night, markedly different to where we'd been a few nights earlier on the coast where it didn't drop below 23°C. 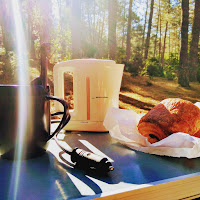 We were woken at 8am by the toot tooting of the baker's van and Tony procured a baguette for lunch plus two pain au chocolat for breakfast. We scoffed the crusty pastries with our morning coffee as the sun rose through the trees.

We departed on foot for the day's hike at 10am. We'd not return until 4pm, totally exhausted from the walk. As the circuit completed itself in Zonza we could see across the valley the mammoth route we'd undertaken.

Deciding that we'd got walking out of our system we planned for another move, back to the coast, the next morning.