Back on the mainland

The five-hour ferry crossing from Corsica back to mainland France was somewhat more enjoyable than the outbound journey. Having learned lessons from the first time, once parked on the car deck we quickly grabbed deck chairs on the sun deck where we could enjoy the morning sun and read our books.

Nice was a nightmare of traffic and we made slow progress leaving the city but, once back on the motorway, the journey through Provence was pleasant and we arrived in the Ardeche just after 5pm. 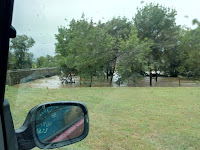 We spent two nights at a friend's holiday home in the village of St Genies. Cleopatra was given two nights off while we slept in the thick stone walls of a former monastery.

Our two-day break from camping would prove to be a lucky escape when 24 hours of thunderstorms battered the region. Rivers burst their banks and 1,600 people were evacuated from local campsites, some by helicopters we could hear overhead. One person lost their life.

We awoke to a perfect blue sky on our morning of departure and you'd barely have known what had happened the previous day.