As I mentioned in the previous blog post, Île de Ré hasn't immediately endeared itself to us. There are just too many cyclists, the beaches are too crowded and we've also found large sections of the sandy beaches where it's impossible to swim because of vast expanses of rock at the water's edge. On the small sections where there's no rock, sunbathers are packed in like sardines. We were hoping to love Île de Ré as much as we like the neighbouring island of Oleron, but we don't.

We always make the best of where we travel to though and so on day two we went back to a beach that showed promise, in Couarde. We were first to lock up our bikes as we'd determined to beat the chaotic bicycle traffic on the cycleways by leaving the campsite early. Settling ourselves well away from the beach's entry point, so we'd not become sardines later in the day, we did the usual beach-day stuff - not really much, apart from reading our books.

As the tide went out it revealed the rocks that would make it impossible to swim, and so we stayed on the beach most of the day. I ventured back towards the busiest section once in order to take a cooling dip in the sea. The air temperature wasn't overwhelming though, so it didn't matter that much that swimming was a laborious saga.

We decided to make day three a sight-seeing day. Our lovely friends Jules and Pete had given Tony some Euros to buy ourselves lunch at their favourite restaurant in St Martin, as a leaving gift when Tony left their mutual employer. We asked for some other suggestions of things we ought to see and do while we were over on that side of the island and were kindly offered several items for our must-see list.

La Flotte has a morning market and so that was our first destination. We arrived as the bicycle racks were beginning to fill up but found ourselves a space each. We locked up the bikes and set off to investigate the shops and market stalls.

We're rubbish at the language and so we avoid interactions such as buying produce from a market, but it's nice to look (and then go and buy probably more expensive and inferior supplies in a supermarket). La Flotte is lovely and after looking at things we wouldn't buy we strolled around the harbour and seafront. I spotte the ruins of an abbey, a silhouette against the morning sunshine, just to the east of the town. The abbey was another must-see on our itinerary and so we set off in that direction having retrieved our bikes from the full-to-bursting cycle racks. 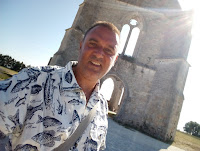 The abbey provided a nice backdrop for many photos before we set ourselves on a seafront course for St Martin and our lunchtime treat. We were the second table of diners at the Ben-Hur Char a Huitres restaurant, sitting down at a couple of minutes to midday.

Restaurants are something else we avoid when we're in France, firstly due to budget, secondly because we genuinely enjoy cooking for ourselves when we're camping, and thirdly because, as mentioned, we are terrible at speaking French.

We've been coming to France for the three and a half years we've owned Cleopatra, our campervan, and in all that time we've only ever bought a meal from a McDonalds where we could order on a touch screen. We were really put off after a holiday in a small village in the Provence hills about ten years ago. We could eat in the house in which we were staying five nights a week and for the other two had to fend for ourselves in the village's restaurants. They did not speak English and so all I could do was order something I recognised. I knew 'thon' was tuna, and Tony ordered 'burger'. My fish was completely raw and Tony's burger was leaching blood. For the other night we had to eat out we bought pre-packed pasta salad from a supermarket and decided never to come to France again.

As campervan owners, France would be back on our traveling map as it's the easiest country to get to when all your holidays destinations are arrived at by road. Our French is improving, Tony's quicker than mine since he's learning it from a Kindle book. I was taught German at school as my first foreign language and when, a year later, I began French lessons I never took to it. 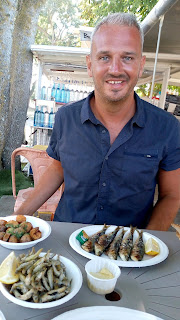 Back to today - a French restaurant that we had to visit because the meal was a gift. Technology has moved on somewhat and so Google Translate helped out with the menu. I ordered squid and Tony grilled sardines. Two menu items had the possibility of being chips so we ordered both.

One of our chip possibilities arrived as fried new potatoes in a garlic sauce. We got two bowls of those when we thought we'd ordered one. The other wasn't anything to do with a potato - it was a bowl of fried whitebait, heads and tails all intact. The meal was lovely if rather more than we've been eating lately! Jules and Pete's choice of restaurant was impeccable; I can see why they enjoy a leisurely lunch there.

In the end the only thing we purchased from a shop all day, true to form, was in Lidl where we continued the day's treats with a bottle of rose wine which is chilling in the cool box right now. At supermarkets you need only say 'bonjour' and 'merci'. And in chains that have a loyalty card you need to recognise when they're asking if you have one in order to say 'non'.

We ended the day with a late arrival at Le Bois-Plage where we found similar to the previous two beaches - it was quiet at the sections where you couldn't swim!

We've had three enjoyable days even though this island isn't quite our thing.