It's literally so hot Tony and I can't exert ourselves to do anything other than sit on the beach all day, with numerous plunges into the sea. Not that the sea is particularly cold - the beach side shower we use to wash off the sea salt is about as cool as we ever get.

It's a lovely bay to swim in, becoming deep quickly and the artificial boundary of a rope and buoys to swim to.

After the beach we return to Cleopatra for or holiday-ritual evenings of beers, cooking, a boardgame and a few glasses of wine while watching the world go by. The only difference at this campsite is that the world is going by naked.

During daytimes on the beach it feels normal to be undressed but as we walk back to camp with just rucksacks covering our backs, it still feels a little strange. Everyone is just minding their own business though - doing what campers do everywhere, just wearing nothing.

It's only dropping to a minimum of 27°C in the early hours of the morning and it's still too much effort performing the smallest of tasks. It's a five minute walk back to Cleopatra after the beach; a shower is needed immediately upon taking off our backpacks. Chopping an onion for dinner can create enough sweat to require a whole additional shower as can doing the dishes once we've eaten.

It's been difficult getting to sleep at night since there's been little breeze. On the plus side I've been able to have the pop-top roof window unzipped all the way since, at this naturist campsite, nobody is going to bat an eyelid if they glimpse a naked buttock while walking past.

Yesterday, after our morning coffees, we decided to set off early to cycle to Porto Vecchio, the whole reason for selecting this location to camp for our second week in Corsica. The distance and hilly terrain is somewhat different to our assumptions after a cursory glance at Google Maps. We'd noted during the final section of the drive to La Chiappa it seemed unlikely we'd make the journey to visit the harbour town at all, it was just too hot to contemplate the 12km bike ride with a 90m peak on the mountainside halfway. But after beach day after beach day we were up for a change of scenery.

We put on clothes for the first time in three days, still the bare minimum of loose-fitting shorts and a vest, and fixed our backpacks to our bicycle pannier racks. We set off by 9am but it was still punishing in the heat even that early in the day.

The ride would afford us some spectacular views out across the bay, and for the first time we could actually take photographs - cameras are a bit of a no-no on a naturist campsite.

I found Porto Vecchio a bit of a let down - more a busy port full of luxury yachts and passenger ferries than the quaint harbour town I'd imagined. We looked in a couple of shops, buying the fridge magnet our neighbour had asked for. When you consider they're looking after our three chickens for six weeks I think we owe them more than a small fridge decoration, but we are still only on island number one of four so I'm sure we'll find a more substantial gift.

Needing a hit of sugar and cold drink before cycling home at what was now midday, we locked our bikes outside the Casino supermarket. We almost settled on a box of four lemon meringue flavoured ice creams but I was feeling too virtuous after eating reasonably healthily for two weeks and steered Tony towards a juicy nectarine each plus two cold drinks from a fridge. Since this would be the only proper supermarket we'd get to visit we bought a bag of onions that would go into a stifado (Greek stew) for dinner one evening, and then started the arduous journey home.

We pushed our bikes to the summit, idiot driver's honking their horns as they passed. What is the purpose of that? There aren't cycle lanes or pavements so where do they expect us to go?

I became so hot that I informed Tony, upon arriving back at the campsite I was going to just cycle into the sea. As it was I made do with a shower, though it would take half an hour in the sea shortly after to truly get my temperature down.

If our bike ride taught us any lessons it was not to bother doing anything again - swimming is the only logical exercise. We do hope that the three west-coast islands will be a little cooler than Corsica. 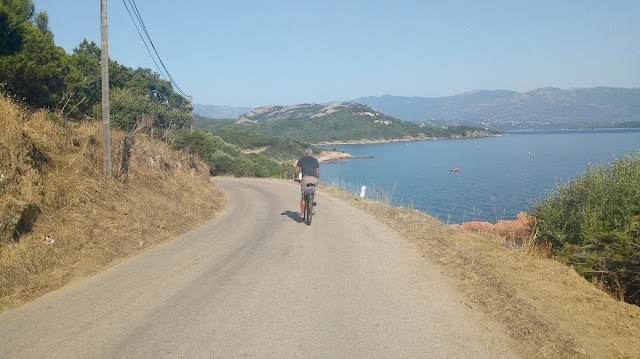