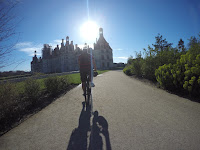 Strangely, on our four-and-a-half hour drive north through France the weather has become warmer. Not always sunnier, but warmer none the least. So it was even more satisfying asking at Camping Indigo Les Chateaux if we might stay four nights instead of the one booked and paid for.

We'd planned the single night here as a half way point between Sarlat and the Eurotunnel and had determined that we'd scope it out for a longer stay in our summer fortnight. Checking in at 2pm, we'd not have been able to fully explore the region. 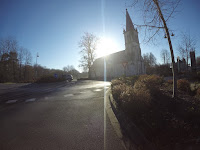 The campsite is in the small town of Braxieux. In itself the town isn't a destination, boasting two small supermarkets and the usual butcher, baker and hairdresser, plus a bar, cafe and hotels.

However, this is a fantastic base to explore the Loire castles. It's slap bang in between the chateaux of Chambord and Cheverny, 8km and 9km on flat cycle paths and woodlands walks that crisscross this part of the countryside.

On our first afternoon we did little more than explore our immediate surroundings, purchasing beer, at twice the price of the larger supermarkets we usually aim for, from one of the two small shops. 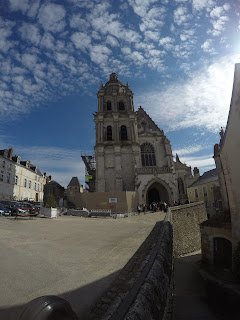 The second day was gloriously sunny and we were up and on our bikes by 9am. Our first destination was the chateau in Chambord. I wasn't prepared for the grandness of it, nor for how well it has been kept. It was more majestic stately home than castle.

We snapped pictures from our bikes, unwilling to fork out €20 to be herded around inside along with the coach-loads of tourists being expelled from their vehicles.

Instead we headed towards the river Loire. Google's idea of a cycle path failed us to start with, as we navigated a muddy track beside a field. My right-hand break cable snapped too, leaving me with half the stopping power as previously. I managed fine until I was cycling with my phone in my left hand and needed to stop, bringing me crashing into Tony as my free hand squeezed the limp right break.

We arrived at the Loire at the small village of Saint-Dyé-sur-Loire. We didn't explore the village, heading instead for the path by the river. From there we biked to Blois.

Blois sits on the hillside overlooking the Loire. It's a largish city that we could see long before our weary legs had pedaled us there. Considerably nicer than it looks from a distance, Blois boasts a gothic Cathedral, and a castle of its own, with interesting shops along its cobbled city centre.

We bought small pizzas from a bakery, stupidly (for it was Sunday morning) thinking we'd get a baguette and other supplies a little nearer to camp.

Once again we were a little perplexed at a couple of stretches of our route home as suggested by Google, but we persevered, arriving in Braxieux village to find everything closed.

Fortunately we'd shopped for most days' meals as we've gone along and a large larder in Cleopatra's boot was mostly untouched. For lunch we whipped up a warm potato salad, with garlic, dill and French mustard dressing, to go with a tin of ham and salad. It was better than anything we might have purchased had the shops been open.

My best advice to a traveler heading to France, is take food and if you find a shop open, take on supplies as though it's the last time shops there will ever be open, as it probably will be.

It clouded over a little in the afternoon and we played a boardgame at the picnic table in the dry of our awning canopy.

For dinner we made macaroni cheese, and when it became a little more chilly, we set the electric blanket on the seat of the picnic bench and sat out under the stars until wine and whisky led us to crave our beds.