On our second full day in Braxieux we went walking, following one of several marked walks through the woods. It was boggy underfoot from the moment we lost the trail. When you have Google Maps in your pocket you don't worry so much about marked trails and so we just walked until we were ready to change course and begin heading back.

The afternoon was due to be sunny and so we returned to town in time for the shops to have closed so we couldn't buy any beer to drink. 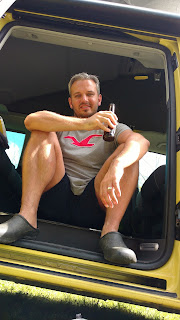 Actually the second of the two little supermarkets was open. We bought beer, and ham to make a sandwich. The shop keepers were a couple well past retirement age and there was no till to speak of, just two calculators with paper rolls.

For dinner we considered buying pizza from the campsite but conceded that we should use some of the ingredients we already had and save some money. We made macaroni cheese, adding a considerable amount of garlic to make it more French.

On our third and final day we did something we rarely do; we went out for the day in Cleopatra. Once we arrive at a campsite and get her set up we don't move her again until we leave, walking or cycling to anywhere we want to go. 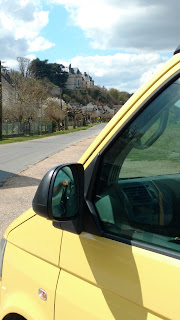 I've been wondering why this is, and it's probably laziness. Although three or four hours of walking or cycling hardly seems the lazy person's option.

It's just that by morning, the roof will be popped up with the bed made upstairs, the table will be out with stuff on, the driver and passenger seats are turned around, and the awning will be out, fastened with pegs and straps. Leaving all that and using our legs always seems the easier option!

But this day, I'd commented to Tony how the campers in motorhomes just get up and drive off. Tony asked if I realised we could do that too, and so we did.

It didn't take long and we could improve the way we camp to make it easier still. Not carrying around so much stuff would be a good start.

But there are plus points of walking and cycling too. Getting exercise is one, and sending less money another, both in fuel and car parking and actually reaching  anywhere we'd have a tendency to get our wallets out. In our initial budgeting for the affordability of a campervan we'd counted on it making us spend less by giving us other things to do at weekends than eat out and shop for stuff we didn't need.

So, we rolled out of Camping Indigo Braxieux in Cleopatra and headed for Château de Cheverny. Unlike the castle we'd visited two days prior, this one was carefully hidden from view without a ticket for entry into the grounds.

So we sneaked a few photos through a mesh fence at the back and decided our €20 euros would be better spent on cakes and meat, and headed for Intermarche. You see, driving anywhere always ends at a shop.

The cakes were two individual lemon meringue pies and the meat, five large pork steaks. We also bought a baguette and ham and drove off to rustle up lunch by the river Loire.

That's another benefit of taking a campervan around wherever you go. You can buy ingredients knowing you have the implements to easily turn them into a meal. It doesn't take much to split a baguette and fill it with ham, granted, but we had the finishing touches of goats cheese, cucumber, mayonnaise, cornichons and French mustard that changed it from cobbled together to delicatessen standard.

We pulled out the chairs and table and ate in the sunshine in the small village of Chaumont-sur-Loire. Then we set off on foot to explore, from the outside only, yet another chateau with an extortionate entry fee.

Our day out driving ended just after 3pm when we headed back to the campsite for a sunny afternoon of book reading and beer drinking.
France