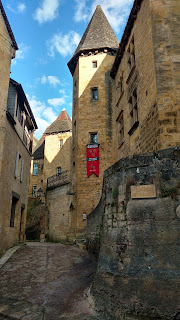 A colleague at work told me Sarlat was supposed to be beautiful. This was all I knew before we arrived as, like our prior destination, I hadn't done any research. And, yes, it turns out that is true.

We arrived, after nearly six hours of traveling from Divonne Les Bains, at 1.45pm. Reception at Camping Indigo Sarlat was open and they let us check in ahead of official arrival time. We'd booked a 'plus' pitch which are larger and come with a picnic table, and we were armed with a map and the choice of two pitches. 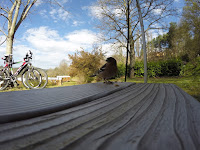 I think the campsite map is a little bit pants as we went merrily driving up a hill that looked like it was the right direction, but clearly wasn't. The girl from reception was in hot pursuit in her golf buggy, asking us to follow her back down and to the correct pitch.

I know the map is at fault because over the course of the next four days we watched countless other people do the same. It was quite amusing. 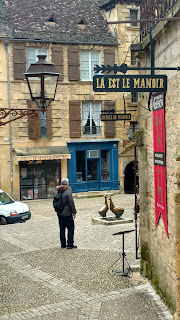 Sarlat is a medieval town with sandstone buildings in narrow streets. It's famous for its market, selling local delicacies like foie gras and cheese, and for its carefully restored 14th century architecture. It's being considered for UNESCO world heritage site status.

The town centre is charming and full of quaint restaurants, tables spilling into the tiny streets. Clearly we were staying out of season and so I'm sure prices rise, but most restaurants were advertising a very reasonably-priced set menu.

The shops in Sarlat sell duck. Seriously, one shop sells the same as the next: tins of duck and goose spreads, patés, terrines and fois gras. Single tins, gift sets of tins, baskets of tins with wine. There's literally 20 shops trying to sell the same thing.

We bought cheese and aubergine tartlets, a crusty baguette and a duck breast. While a stall selling handmade jams made us want to try several delicious-sounding flavours, at €7 a jar that was never going to happen. Instead we bought two jars, of fig and rhubarb jam, in the supermarket for a quarter of that.

With the duck we prepared warm duck salad. We fried the duck, fat-side down, until the fat had melted, using it to fry diced potato. A little of our remaining blackcurrant jam mixed with olive oil was an excellent sauce for the tender slices of duck breast, served with a crunchy salad. We cooked and ate it at our picnic bench looking out over the green countryside, dotted with little yellow-stoned, red-roofed houses. 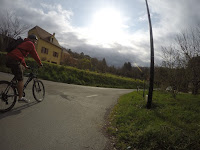 On our first full day we did nothing more than visit the market and spend the rest of the day sitting in the sun. The campsite is terraced and from up high the view is superb. What really made it for me were the birds, tame as anything, who came to visit. There were robins and great tits, but the friendliest bird was a fat male chaffinch who would sit on Cleopatra's wing mirror and tap on the window to get our attention, especially around eight o'clock in the morning!

Our second day was a bike ride and we took a cycle path that was once a railway, now perfectly tarmacked, for 12 kilometers along the Dordogne, to Saint-Julien-de-Lampon. Here we bought cakes from the village patisserie and scoffed them sitting on a wall by the crossroads. Mine was a lemon meringue pie, with meringue so soft I ended up with it all over my face.

We could have cycled further but rain was forecast and we returned to Sarlat by 2pm.
We stopped to buy supplies at E. Leclerc, a supermarket chain we'd not visited before. I was keen to check out how the price of the five litre boxes of wine we take home compared to Super U. The cheapest I could see was €6.50 though we would discover when we left town on Saturday that you can expect the price of wine to rise considerably at the weekend! 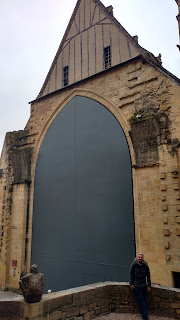 I'd definitely return to Sarlat and heartily recommend Camping Indigo which is just ten minutes walk from the town centre, while being quiet and peaceful.

Today, Saturday, should have been our final night. However I've been able to negotiate, via email, a few more unpaid holiday days and so we're still heading north to be nearer to the tunnel, but we've got four nights at the next site instead of one, and a chance to properly explore once again.

There's something massively liberating in thinking you'd love to stay a bit longer and just being able to do it. Owning a campervan already gives you the freedom to come and go as you please, wherever and whenever the mood takes you. I'm really grateful, I'm not yet sure to whomever at work is filling in so we can extend this Easter escape.