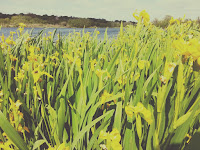 We were given a very warm and friendly welcome to the Whittlingham Broad Campsite near Norwich. It's a campsite so new that if you look at it on Google Earth it's a clay pit. The whole site has a kind of hippy vibe and evokes a feeling of what camping used to be years ago. You could easily fill a week with some of the suggestions of things to see and do on their fabulous website.

Essentially it's just two fields in a prime location, bounded by trees and Whittlingham Broad lakes. The upper field it for tents only and has several permanent yurts and luxury shepherds huts. The lower field also allows small campervans and therefore this is where Cleopatra was parked for our Norfolk Broads camping weekend. 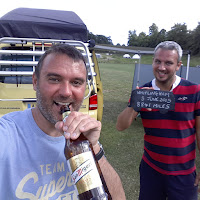 It just so happened that a school was pitched at one end of the lower field and a scout group at the other. To say they were noisy is an understatement. It's a real shame they allow campervans only in the lower field. In long periods of fine weather no damage is going to be done to the upper field by wheeled vehicles. We didn't leave a mark on the field we were in. Actually, given the number of tent pegs I bent in the hard ground I defy anyone to damage it!

This was an off-grid weekend as the campsite is very simple and there are no electric hook-ups. It's no hardship to have a couple of days on the leisure battery and it was used mainly to keep the coolbox cold. We carry around a wood-gas stove that's fuelled only with sticks and pine cones. I used this to boil water for coffee, and in the evenings we used out mini barbecue, again fuelled with sticks and pine cones. It's great because it costs nothing, and spending time in the great outdoors ought to be pretty cost neutral. We cooked lamb burgers and had them in bread buns with ketchup on the first night. On the second night we had pork ribs and a lentil and vegetable salad. 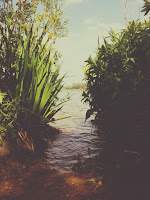 Elsewhere around the site campers were renting fire pits from the site owners. It was such gloriously sunny weather that there was no need - I can only assume they were infrequent campers who wanted the whole campsite experience in one weekend. At just over £10 with the logs and kindling included I think they wasted their money personally - but if they got enjoyment from it I'm sure it was worth it.

I woke to a clear blue sky and the sound of the scouts running around and shouting. I got up and showered and then, as I waited for the kettle to boil on the stick stove, I looked at my phone to discover it wasn't even 7am. 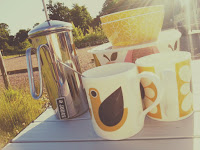 It's inexcusable to be woken just after 6am when you've paid hard-earned cash to enjoy a weekend away. Granted many other sites allow children's groups and so you could say it's pot luck, but this site has two fields and therefore it has the option to devote one of them to such groups when necessary. A lesson I hope the campsite will learn is to let school and scout groups have the lower field and let everyone else use the upper one.

Still, the early awakening allowed us to cram a lot in to the day. We walked into Norwich where we mooched around the shops, bought a tasty hot pie each from the West Cornwall Pasty Co and enjoyed them on our leisurely stroll back. We were back before midday and spent a couple of hours sitting in the sun before deciding to explore some more. 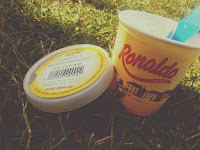 We walked around the lake and I brought along an empty bag in which to collect pine cones. Unfortunately there aren't an awful lot of pine trees in the vicinity. Still we enjoyed the walk and the fauna and flora. We also enjoyed tubs of totally delicious locally-produced ice cream from the Visitors Centre. Tony had chocolate fudge and I had gooseberry. They're 40p cheaper from the campsite shop, but it wasn't open when we were ready to give in to temptation!

We then continued walking into the village of Trowse. There's not much to report on here. One pub was closed and the other had no beer garden to speak of, just a couple of tables out the front, across the road from a busy children's playground. Since Cleopatra has a fully-stocked bar we returned to camp and continued sitting in the sun, drinking our beers, until it disappeared behind the trees as evening fell. 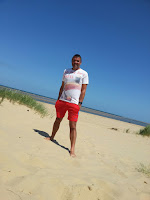 On Sunday morning I slept until 8.30am. The scouts were quiet and the school had left the previous morning. I'm not sure why the scouts were so quiet - maybe they were sad at having to leave (though they showed no signs of packing their tents up).

We were required to vacate our pitch by 11am. We'd been told we could extend our stay in the car park for longer if we wanted, which is a nice touch. Niggles with the other campers aside this is a site I'd return to and one I like enough to add to the select few on my campsite recommendations page. 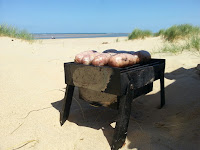 As the sky was clear blue again we decided we'd include a visit to Wells-Next-The-Sea on our way home and spent a dreamy couple of hours laying on the beach and cooking sausages on our barbecue. I hadn't seen any signs saying you couldn't use barbecues but I did expect to get told off at any moment. I've just checked the website for the Holkham Estate and it does actually say 'The use of barbeques is prohibited.' But since barbeque spelled with a 'Q'  isn't even a word, our barbecue with a 'C' wasn't breaking any rules!

On our way to Wells we passed High Sand Creek campsite in Stiffkey. I Googled it to discover it is listed on coolcamping.co.uk, a site I trust implicitly, so we booked it for a future weekend!