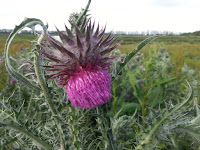 There are a few campsites we've stayed at in one of the many tents we've owned over the years that we've been wanting to return to. Karma Farm near Thetford is one of those and we returned with Cleopatra, our campervan, this weekend.

Karma Farm bills itself as an 'eco' campsite. It's a working farm that farms ecologically. That theme continues into the campsite where many of the facilities appear to have been recycled from some other previous use. To me though, it just seems as though everything needs a bloody good clean up and mending. 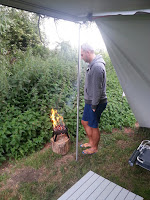 There is something quirky about the site though and it's in a very tranquil setting and many pitches are secluded, set in small clearings among trees and clumps of stinging nettles taller that I am.

The piece and quiet was well and truly shattered this weekend owing to dozens of kids running and cycling around playing cops and robbers with water pistols, and climbing the tree house in the next clearing to ours.

Breakfast on Saturday was experimental as I'd bought along a tin of SPAM. I've never eaten SPAM and I don't really know what made me buy it. I cut it into chunks and fried it until it was crispy on the outside. Then I added baked beans to create a one pot fry up which wasn't half bad. I'd actually recommend it since SPAM lasts years in its tin so you can carry it around until you need it. 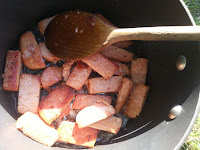 We left the noisy kids to their games and headed out on our bikes for a ride to nearby village Freckenham and the lovely Golden Boar pub where we enjoyed a pint of real ale in the peaceful beer garden. We cycled on to Fordham to the Crown pub, wishing that we'd stayed put in Freckenham instead as the clientèle were as downmarket as the pub itself.

We spent the afternoon sitting outside the campervan in the sun. We cooked garlic mushrooms for lunch which we heaped onto fresh crusty bread. Dinner was spaghetti Bolognaise.