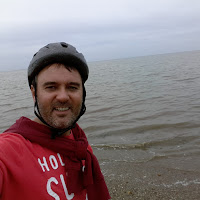 We've camped in a tent at the Camping and Caravanning Club's Sandringham site and so knew what to expect. It's a huge site with 275 pitches spread through extensive grounds on the Sandringham estate.

It was a busy weekend but the sheer size of the site means it's not at all crowded or claustrophobic. 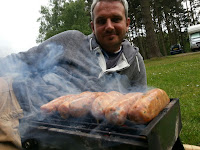 We were parked on our grass pitch at around 6pm and barbecued sausages for hot dogs over pine cones in our miniature barbecue. We did similar on Saturday night too and it wasn't until I was in the dishwashing room on Sunday morning that I saw signs saying barbecues must not have wood or cones added to turn them into camp fires. Just lately it seems what I consider to be quite reasonable things are against the rules. 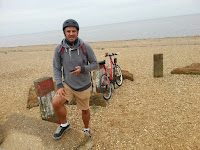 On Saturday morning we cycled to Snettisham on national cycle route 1. We had a cup of tea at a car boot sale taking place on the village green and then continued our bike ride to Snettisham beach. 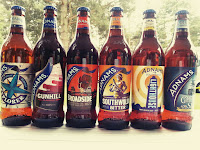 We only stayed at the beach long enough for photos as there's nothing there and it wasn't sunny enough to encourage us to sit on the pebbles. On our route back to Sandringham we stopped for fish and chips in Dersingham and bought a six-bottle assortment of Adnams ales for £9 at Budgens.

Fitting a box of six ales in the rucksack was a challenge and we had to wear the two coats it had formerly stowed. 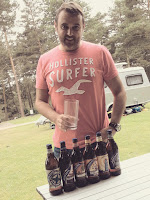 We spent the afternoon lazing outside watching the world go by. The day culminated in an amazing thunder storm and we sat and watched the lightening and rain from underneath the awning. There's something quite satisfying about being in the great outdoors sheltering during a storm.