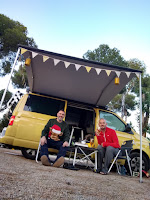 As we turned off the motorway towards the coast, the sat nav indicated seven minutes to our campsite, the first chosen from our new ACSI book. Ugly hotel blocks came into view and I hoped our seven minutes left of driving would take us past them and back into countryside. Instead we just creeped closer and closer to them until, at the last roundabout, we turned off towards what was possibly the most run down of them all.

Tony pulled up in front of the perimeter wall of the campsite, Camping and Bungalows Didota. It did not look promising at all. Used to the spacious and nature-adjacent campsites of France, rows of tightly-packed caravans and motorhomes inside an enclosed wall was unappealing. However, we'd been on the road for about 22 hours and I didn't want to be the one to say I didn't want to stay. I was half hoping Tony was going to announce that he didn't like the look of it but he didn't. 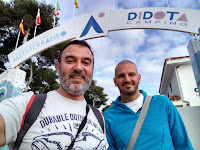 We were looking at a plan of the site on a noticeboard when the lady from reception left and locked the door. There was no rush to decide and so we went for a walk around the site. What was immediately obvious was the clients were almost all retirees and, though busy and nearly full, the campsite was quiet. This went in its favour. Also, although devoid of all character, the site was spotlessly clean and its facilities block spacious and immaculate.

I was becoming less against staying and pointed out some of the benefits to Tony who agreed we should book in for three of the six nights we would be spending in Spain.

Back at reception there was a notice on the door with 'Back in 10 minutes' written in several languages. The lady returned shortly after, acknowledging having seen us looking at the site plan and apologising that she hadn't realised we wanted to check in. We were provided with a printed site map indicating which pitches were free and allowed to walk around and choose which one we'd like. There were about ten free spots and we narrowed it down to three, walking back and forth between them until settled on one.

Our ACSI book (a membership card and accompanying guide that offers sizeable discounts on camping out of peak summer season) was for 2020. It was 27 December and all of our three nights would fall into 2019. However I was keen to try to blag us reduced rates and I suggested we try using the 2020 card and if challenged we'd search through our wallets and feign our sadness at having misplaced 2019's. I have to say I was so convincing in my search that even I thought I might actually find it. Maybe because she was fed up of waiting or maybe just out of kindness, the receptionist allowed us to pay the ACSI price of just 16 euros per night for two people with 4KWh of electricity. That was half of the full price.

In the information we were given we'd later read that they also accept the Best Deal Camping Card, something I'd signed up for the previous year that cost nothing and was simply emailed to me. We could have perfectly legitimately obtained the discount!

We didn't realise at the time but a tree was at the front of our pitch, right in the centre, making access rather difficult. The pitch behind was also vacant and so we drove around the block, driving on to ours through that. We were soon pitched and, in the 17 degree sunshine I finally removed my Christmas jumper. We'd found winter sun! 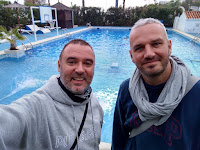 Camping Didota is right on a pebble beach, though there's no view of it from the site. You can pay a deposit for a card that opens a gate directly onto the beach but there's really no need as the main entrance is just yards from the seafront. There's nothing adjacent to the site on the north side. To the south there's another campsite and the ugly hotel or apartment building I mentioned previously. You can then walk along the seafront all the way into the town of Oropesa, about 50 minutes on foot. Cycle lanes are slightly less scenic, taking you between two streets of tall, uninspiring hotels.

The pebble beach quickly becomes sandy and would be great for kids, but when you look at the sheer size and number of hotels that line the seafront it's easy to imagine how packed the beach would be in the summer. In December though the hotels were deserted and the campsites full.

My initial assessment had been correct and the campers were mainly retired and split between British, French, German, Spanish, Belgian and Dutch. An English couple from Coventry were on the pitch next to us and had been there for three months. The ACSI price gets cheaper the longer you stay at Camping Didota, working out that seven nights are the same price as six and the cheapest price applying from 45 nights onwards when it's just €10.67 per night.

The site has a nice outdoor swimming pool which was unheated and therefore not suitable for use out of season. The indoor pool turned out to be tiny, requiring booking a half hour slot and swimming against an artificial current. A bar and restaurant seemed to be well frequented (though not by us) and there were daily activities and entertainment clearly aimed at the older clientele, including bingo, a 1950's live band, yoga and Spanish lessons. Once again, we'd normally avoid a campsite with entertainment but I should point out that at no time could we hear a sound from our pitch and everything seemed to end at 8pm anyway.

The facilities were great with plentiful showers, toilets and dish washing facilities for the size of the site. The showers were fully adjustable, powerful and not push button. You do have to choose the time of your shower just right though or you'll find the hot water has all gone. 9am and 6pm seemed to be about the times it ran out.

We had two short power cuts during our stay. One lasting about ten seconds and one five minutes. The ACSI discounted rate includes 4 kilowatt hours of electricity with an additional charge for usage over and above. This is only the second time we've had a usage restriction and to satisfy myself we wouldn't run up a huge bill I Googled what we could safely use. One kilowatt hour means using a 1,000 watt appliance for one hour. Our electric hob was 1,500 watts, meaning we could use it for a little more that two and a half hours a day. It seemed like we would be comfortably under, given that we usually only used the hob for half an hour, boiled a kettle once or twice, used the van's LED lights and charged our phones. We decided this was not the time to use our electric heater and kept warm in the evenings by using the van's diesel heater. When we checked out we'd not incurred any additional fee for electrical usage. 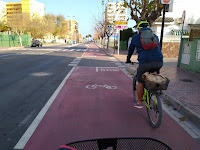 Camping Didota is well placed for cycling and walking. Walking north along the beach you soon come to a boardwalk through a nature reserve. Walking south brings you to Oropesa and its shops and restaurants. If you continue to the harbour there are footpaths into the hills and along the Via Verde, a former railway line. You can walk or cycle to Benicassim from here. Oropesa has a train station where you can get a train to Valencia every 50 minutes or so at a cost of around €9 return. Trains also run to Peniscola which is worth a visit, or Barcelona is just a little further.

We found Camping Didota to be a pleasant campsite and we extended our three nights to six. It was quiet, the staff friendly and helpful, the facilities good (once you had worked out the ideal time to get hot water) and it was well placed for days out on foot, bike and by train. Though we'd much prefer more spacious pitches with a view, this type of tightly-packed campsite seems to be prevalent in this part of Spain. For the price we paid per night it was excellent value and a great winter sun destination.